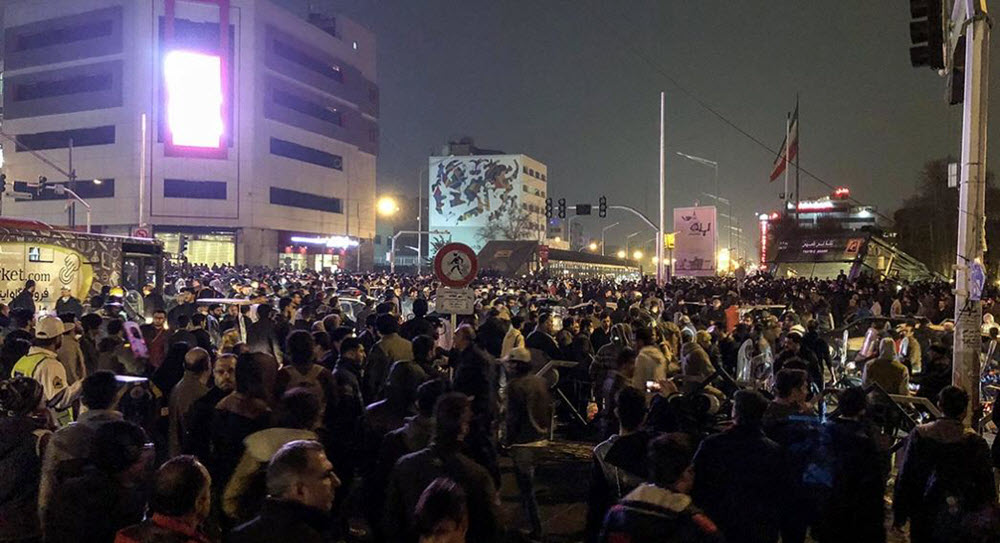 The protests in Iran escalated on Monday, with demonstrators ignoring President Hassan Rouhani’s orders to stop and instead attacking the offices for the Basij, a brutal security force that routinely attacks the Iranian people.

The protests- already the most widespread and populous in more than a decade- consists of tens of thousands of people across the country from Tehran, Tabriz, Ardabil, Karaj, Abadan and Ahwaz, despite the strict security measures designed to stop more protests and more protesters.

In Mashhad, the second largest city in Iran, activists began protesting about the sharp rise in the cost of basic food supplies on Thursday. The protest then expanded into an anti-regime protest, especially about the Regime’s regional warfare and turning their cities into military bases.

Demonstrations spread to smaller cities, including Bandar Abbas, Kermanshah, Yassouj, Zanjan, Takestan, Izeh and Shahin Shahr. Many schools in the affected cities have been closed during the protests and will likely remain closed.

Activists have attacked financial institutions owned by the Basij, which fleeced many Iranians of their life savings, religious centres and schools, which indoctrinate many with the radical Islamic teachings of the Ayatollahs, and Regime buildings. Some have also attacked police cars- as the police are often arresting people with no evidence or beating women who are not covered up according to the mullah’s laws.

Is it any wonder the protesters would attack property owned by the Regime and their so-called security forces?

Ramadan Sharif, a spokesman for the Islamic Revolutionary Guards Corps (IRGC), said that the police and internal security forces “fully control the situation in Tehran and other cities where street protests took place.”

This means that they are more than likely using violence against the protesters.

There are currently at least 21 dead according to the Regime’s news agencies, including one police officer, with 450 protesters arrested. However, the numbers are likely to be much higher, given the Regime’s reputation for altering statistics to make themselves look better.

The Regime has also blocked internet service in several cities to prevent the protesters from sharing their point-of-view.

In response, the US may launch a satellite to provide free internet services for users in Iran.

Donald Trump also said that it was “time for change” in Iran and that the Regime was failing at every level.

On Monday, he tweeted: “The great Iranian people have been repressed for many years. They are hungry for food & for freedom. Along with human rights, the wealth of Iran is being looted.”