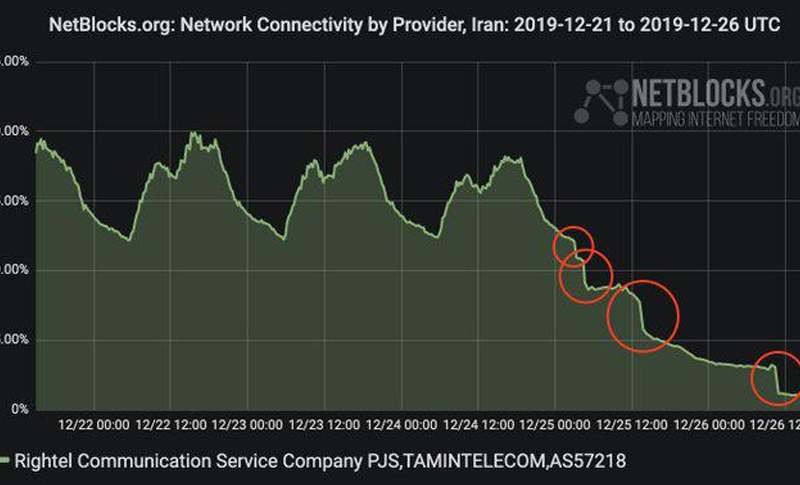 The website of the People’s Mojahedin Organization of Iran (PMOI/MEK) On Thursday December 26, the mullahs’ regime has launched a “massive crackdown campaign throughout the country as Iranians are holding ceremonies for civilians killed by the regime’s security forces” during the November nationwide protests.

MEK website also reported that “the Internet is highly disrupted in Iran and a number of provinces in the south, west and central parts of the country are reporting internet access down or very slow.”

The regime’s security forces have also arrested a large number of family members of martyrs of the November nationwide protest, youths and recently released prisoners.

Regime authorities are attempting to prevent such ceremonies for the November nationwide protests martyrs.

The MEK website also mentioned that the “Revolutionary Guards (IRGC) is placing units on full alert on December 26 as Iranians across the country are scheduling ceremonies for civilians killed by the regime’s security forces during the November uprising. Reports indicate the IRGC has issued orders and instructions placing all units on full alert. These units are ordered to conduct patrols and parades at 9 am and 2 pm local time on Thursday, equipped with full anti-riot gear to install as much fear as possible among locals.”

The objective of IRGC was to create a climate of fear to prevent any possible popular protests on Thursday. Orders and instructions called to set up checkpoints and special patrols across all cities, towns, and villages. The IRGC command had also specifically issued orders for units to protect the regime’s state TV and radio stations, along with protective units to be stationed in and around various military sites.

The Iranian Regime is extremely concerned about possible protests as ceremonies are scheduled for today marking the 40th day after many civilians were killed by the mullahs’ regime during the November nationwide protests.

“The names of 601 martyrs of the nationwide uprising released – Crime against humanity, begun with the November uprising, continues with arbitrary arrests, torturing prisoners, keeping families in the dark about the fate of their children,” tweeted Mrs. Maryam Rajavi the President-Elect of the National Council of Resistance of Iran (NCRI).

The names of 601 martyrs of the nationwide uprising released- Crime against humanity, begun with the November uprising, continues with arbitrary arrests, torturing prisoners, keeping families in the dark about the fate of their children #IranProtestshttps://t.co/R4HoUdP1Cr pic.twitter.com/7dqblL2EnA

“According to popular reports, 4G internet in five provinces is out of service since Thursday morning. It appears these internet restrictions are imposed to confront calls for gatherings on December 26,” wrote the state-run Khabar Fori website.

Iran Protests 2019 Background:
• Thousands of people took part in the Iran protests.
• The protesters demanded ‘regime change’ and the overthrow of Supreme leader Ali Khamenei
• The Iranian opposition movement the People’s Mojahedin Organization of Iran (PMOI), or Mujahedin-e-Khalq (MEK), was behind much of the protests.
• According to the MEK, the number of victims who have been identified so far is 601.
• The number of martyrs of the nationwide protests exceeds 1,500. Several children and minors are among the victims.
• A large number of women and girls are among those killed and arrested during the November 2019 uprising.
• The Iran protests took place in more than 100 areas of the capital Tehran.
• The protests also took place in 27 provinces.
• According to Rahmani Fazli the regime Interior minister, the protesters destroyed at least 50 police and army centers, 140 government centers, 183 police vehicles, nine seminaries, 731 state-affiliated banks, and 70 gas stations.