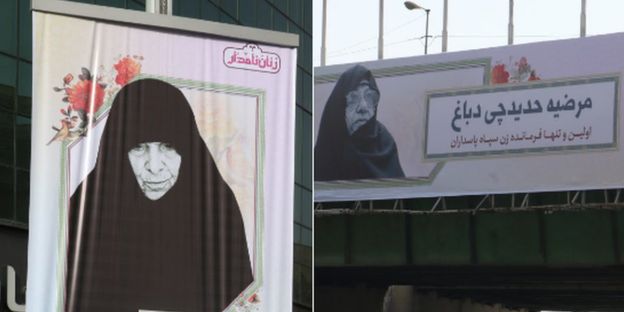 by Staff writer, SF
The Iranian Regime has put up billboards in Tehran to celebrate the achievements of groundbreaking Iranian women, like mathematician Maryam Mirzakhani, the first woman to win the Fields Medal, but if this sounds like a positive step towards gender equality during Women’s History Month, it’s not.

It’s a slap in the face to the ordinary women living under this misogynistic Regime, which has made women literally worth half of a man under the law.
Many Iranian people, women in particular, took to social media to call out the Regime for using these billboards as a meaningless publicity stunt designed to distract people from the real issues of the Iranian people during the ongoing, nationwide anti-regime protests.

This includes the mandatory hijab law, enforced by the Iranian Regime, which mandates that a woman must be ‘modestly’ dressed at all times.
Over 30 women have been arrested for protesting this sexist law by removing their headscarves in public and they are each facing up to 10 years in prison, while one woman has already been sentenced to two years in prison.

To really add salt to the wound, some of these billboards have been erected on Revolution Street, at the site of the anti-compulsory hijab protests.

When Tehran’s MP Fatemeh Saeedi referred to the campaign as “good work” by Tehran’s council, one social media user responded that this was a mere “publicity move”.

Iranian women don’t need billboards to showcase female achievement, they need equal protection under the law, equal rights in the family sphere, and equal opportunities in education and employment.

Some Iranian people have even pointed out that the Iranian Regime has left off multiple women who were forced to leave Iran because of these sexist laws, like Stanford professor Maryam Mirzakhani who went to the US.

One Iranian wrote: “She was forced to leave, not only her but a hundred other geniuses. If she lived and had returned she would not have been allowed to teach for she had not observed the hijab.”

It is clear that the people of Iran will not be deceived by these PR moves and will continue their fight for freedom and democracy in Iran until they achieve it. What is also clear is that the rest of the world should stand with them and refuse to be taken in by token gestures.

The Iranian people are calling out for regime change, which would involve the Iranian Resistance and its President-elect Maryam Rajavi taking over, and it is coming soon. Eventually, we will see billboards of Rajavi up across Tehran.