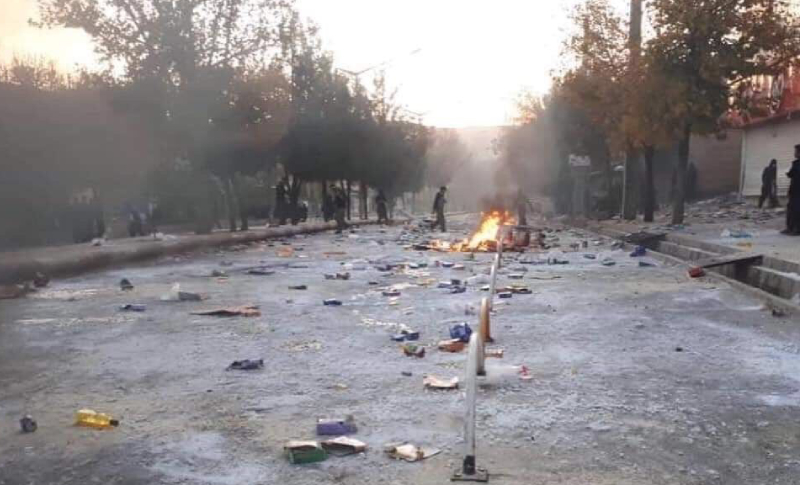 There is more evidence emerging every day that suggests the Iranian Regime is committing crimes against humanity against defenseless protesters during the Iran uprising, most often opening fire indiscriminately and killing them en-masse.

Over 1,500 Killed in #IranProtests
SHOCKING CRIME UNDOUBTEDLY ONE OF THE MOST HORRIFIC CRIMES OF 21ST CENTURYhttps://t.co/GxRaaX2tVa pic.twitter.com/Ozbdy2DD0O

Some of the intelligence agents and security forces even attacked protesters who were taken to Fatemeh Zahra Hospital in Robat Karim, according to an eyewitness whose family member was wounded during the protests and spoke to Iran Human Rights Monitor.

The relative, whose name was not given, said that just after they arrived at the hospital to visit their relative, several pickup trucks packed with armed plainclothes agents and men in Revolutionary Guard uniforms arrived, ordering visitors and staff out of the hospital, claiming that they were there to arrest an armed man who posed a risk to the public.

The relative recounted that they heard the sound of shootings and then the agents rushed out without arresting anyone. The staff went back in, but the visitors were not allowed to see patients for about five hours. Then, families who had seen their loved ones just hours before, who had a small injury but were awake, were told that the relatives had died due to “reasons which did not make sense”.

The relative said: “A nurse [told] us that the 22-year-old [who] was our relative had [died] due to heart failure. His mother and sisters did not believe it. They said, “There must have been some mistake. We saw him with our own eyes that he had been just shot in the leg. How could he die?” But no one was accountable.”

The relative explained that after many requests, the protester’s mother was finally allowed to see him and realized that he’d been shot in the head, even though he’d only been shot in the leg during the protests. However, his family was forced to sign pledges to say that their child had been killed by “thugs”, that they would not announce his death publicly, or bury him in large cities, in order to receive his body.

The more we hear about the crackdown on the uprising, the more poignant the UN High Commissioner for Human Rights’ quote about an “extremely disturbing” picture coming out of Iran becomes.

In Tehran’s Labbafinejd Hospital, one eyewitness said that security forces and plainclothes agents took wounded protesters from hospitals, the same day they were brought in. Many families are even being denied knowledge about where their relatives are.