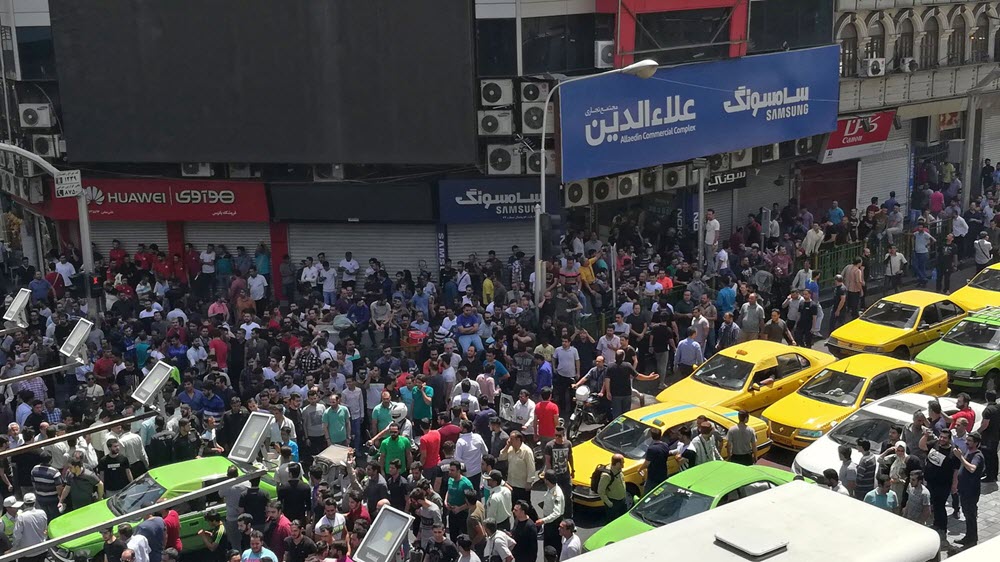 Jan. 18 (UPI) — Iran, despite its rich, civilized and open culture, has become an international pariah, its religious fascist regime condemned for human rights abuse and the export of terror, while its 80 million beleaguered citizens, over half of whom are under 30, struggle to feed their families against a background of power outages, water shortages and food prices that have risen by more than 50 percent. Since the second tranche of U.S. sanctions affecting oil and banking came into effect on Nov. 5, Iran is producing 1 million fewer barrels of oil a day. It has cost the Iranian economy $2 billion since November. But the mullahs continue to fund terrorism.

Iran’s descent into economic chaos can be traced directly to Supreme Leader Ayatollah Ali Khamenei and President Hassan Rouhani. Their policy of aggressive military expansionism across the Middle East has seen them consistently pour men and resources into Bashar al-Assad’s murderous civil war, the genocidal campaign against the Sunni population of neighboring Iraq, their support for the Houthi rebels in Yemen and their vast funding for the Hezbollah terrorists in Lebanon. They pay $750 million a year to Hezbollah in Lebanon alone. This is clearly no longer sustainable.

Combined with the mullahs’ predilection for corruptly lining their own pockets, it is little surprise that the country with the world’s second-largest gas reserves and fourth-largest crude oil reserves is facing economic meltdown and nationwide protests. Millions of Iranians have taken to the streets every day for more than a year, protesting the venal corruption of the ruling mullahs and their wanton spending on conflict and terror.

In a blind panic, the mullahs’ regime has used their gestapo, the Islamic Revolutionary Guards Corps to crack down mercilessly on the protesters and strikers, murdering dozens and arresting over 12,000. In an attempt to show that they are fighting corruption and to distract public attention from their own venality, they have staged a number of show trials of prominent businessmen, labeled as “sultans.” So far, several of these so-called “sultans” have been executed for alleged corruption, including Vahid Mazlumin, known as the Sultan of Coins and Hamid Darmani, known as the Sultan of Bitumen. A further 31 merchants, including two physicians, have been charged with corruption and systematic smuggling.

Iran’s monetary and financial institutions are in the hands of the regime’s leaders. On Feb. 28, 1979, immediately following the revolution, the regime established the Foundation of the Underprivileged. Twenty-eight private banks and industries covering steel, aluminum and vehicles were confiscated by the state, together with the properties of all of the biggest businessmen, who were the backbone of the Iranian economy. All were nationalized and handed over to the foundation, which was wholly controlled by the founder of the Islamic Republic, Ayatollah Khomeini.

In 2013, this foundation was valued at $95 billion. All foundations like this get their funding directly from the government. They don’t pay tax and they have no accountability for how they spend their money. The IRGC also has a tight grip on these foundations. Iran has used the construction companies under the control of these foundations to spread the Islamic revolution in countries across the Middle East. These IRGC construction companies also run missile factories.

The IRGC’s stranglehold on the Iranian economy has been disastrous. There are 75,000 unfinished construction projects in Iran. Money is allocated annually, but never spent on these projects. The regime owes $150 billion to contractors. So, the government has been held hostage by the IRGC for years because of these escalating debts. The resulting devastation of Iran’s production capabilities has been massive. Thirty-eight cotton companies closed last year. A thousand factory units building fridges, TVs, textiles, etc., have also closed. Mass unemployment has been the inevitable result. There are 1.2 million more unemployed people in Iran every year, mostly young people. The regime’s own statistics say the average monthly wage of a worker today is only enough to last for one week. People are now selling their organs, kidneys and bone marrow to try to avoid starvation. Twenty thousand people are sleeping rough in Tehran alone, of which 5,000 are women.

The International Monetary Fund said that in 2018 Iran had 1.5 percent negative growth. It predicts 3.6 percent negative growth in 2019 and a decrease of $97 billion in GDP. So, the regime’s system of velayat-e-faqih, the guardianship of the Islamic jurist, offers no solution to the economic crisis. The whole Iranian economy is focused on the military requirements of the IRGC. Iranian society is facing chaos. The capacity of the regime to reform the economy is no longer there. Instead, the mullahs turn their attention to demonizing the main democratic opposition movement, the Peoples’ Mojahedin of Iran (PMOI or MEK) to hide the reality of their economic mismanagement. That is why the protesters on the streets of every town and city in Iran can be heard shouting “death to this deceiving government.”

Struan Stevenson is the Coordinator of the Campaign for Iran Change. He has served as a member of the European Parliament representing Scotland (1999-2014), president of the Parliament’s Delegation for Relations with Iraq (2009-14) and chairman of Friends of a Free Iran Intergroup (2004-14). He is an international lecturer on the Middle East and president of the European Iraqi Freedom Association.