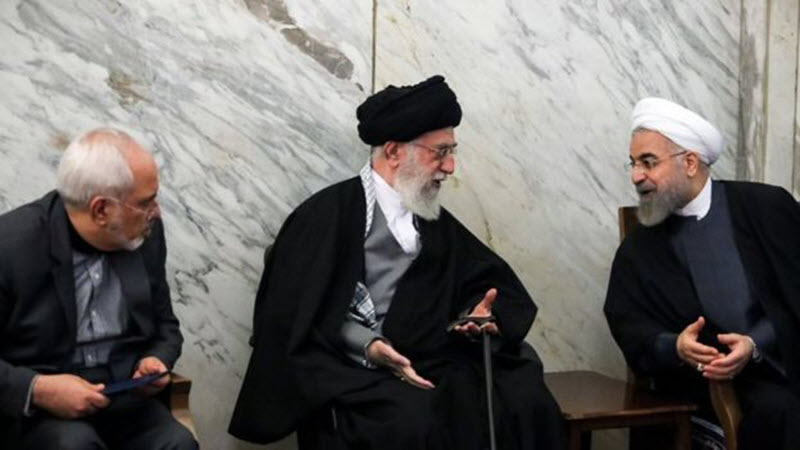 Khamenei, who was speaking to hand-picked representatives of Iranian students on Wednesday, May 22, expressed his dissatisfaction with the way President Hassan Rouhani and his team handled the nuclear deal also known as JCPOA. He insisted that “I did not believe in the way the JCPOA was done, and I have made this clear to the president and the foreign minister on many occasions.”

Referring to a letter he sent to President Rouhani on October 21, 2015, Khamenei noted, “Read my letter regarding the JCPOA and the conditions set for its ratification. But, if these conditions were not met, it is not the Leader’s responsibility to intervene.”

However, he preferred not to mention the fact that JCPOA was sealed on July 14, 2015, more than three months before his letter addressed to Rouhani.

Once again, Khamenei stopped short of explaining why he sent the letter if the Supreme Leader is expected to keep away from executive affairs.

It is a well-known fact that the Islamic Republic’s presidency has limited powers and basically is in charge of some ministries, while foreign policy direction, military affairs, judicial powers, religious hierarchy, public broadcasting and may other domains are directly or indirectly controlled by Khamenei.

Meanwhile, Khamenei reiterated that he did not approve of the JCPOA but allowed negotiations. “But the way the JCPOA was handled, I really did not believe in it, and mentioned my reservations to the president and the foreign minister and had warned them several times”, he added.

Khamenei has repeatedly expressed his dissatisfaction with JCPOA, especially after the U.S. President Donald Trump decided to withdraw from the deal.

In the meantime, a look at the timeline of the talks that led to the approval of JCPOA shows that they all major steps were taken with Khamenei’s blessing.

The nuclear talks kicked off first in June 2003, during Mohammad Khatami’s presidency, after Western intelligence services and an Iranian opposition group revealed the existence of a hidden nuclear site at the city of Natanz, central Iran.

Immediately later, an inspection by the U.N.’s International Atomic Energy Agency (IAEA) revealed it was used to enrich uranium.

The revelation forced pro-reform Khatami to engage France, Germany, and the U.K. in nuclear talks aimed at warding off the danger of international sanctions. Washington refused to take part in the negotiations.

Hassan Rouhani, then the secretary of the Islamic Republic Supreme National Security Council, led the Iranian delegation in the talks with the European trio (E3).

As Khamenei has the last word in all national affairs in Iran, one can easily assume that the talks had his blessings.

Nevertheless, after the election of the hardline Mahmoud Ahmadinejad as president in 2005, Iran resumed its enrichment activities in February 2006, which delivered the coup de grace to the talks with the E3.

Iran regime’s move eventually led to a series of U.N. resolutions against Tehran. Ahmadinejad, fully supported by Khamenei, dismissed the U.N. sanctions on Iran as “fit for the dustbin.”

By 2011, the full weight of sanctions began seriously affecting Iran and in 2013 Iran started contacts with the U.S. through the mediation of Oman. In June, Rouhani was elected president by the fall of that year nuclear talks were in full swing.

Khamenei implicitly acknowledged his approval by calling it “heroic flexibility”.

But with Donald Trump’s decision to withdraw from the agreement and reimpose sanctions, Khamenei now tries to blame Rouhani and foreign minister Mohammad Javad Zarif.