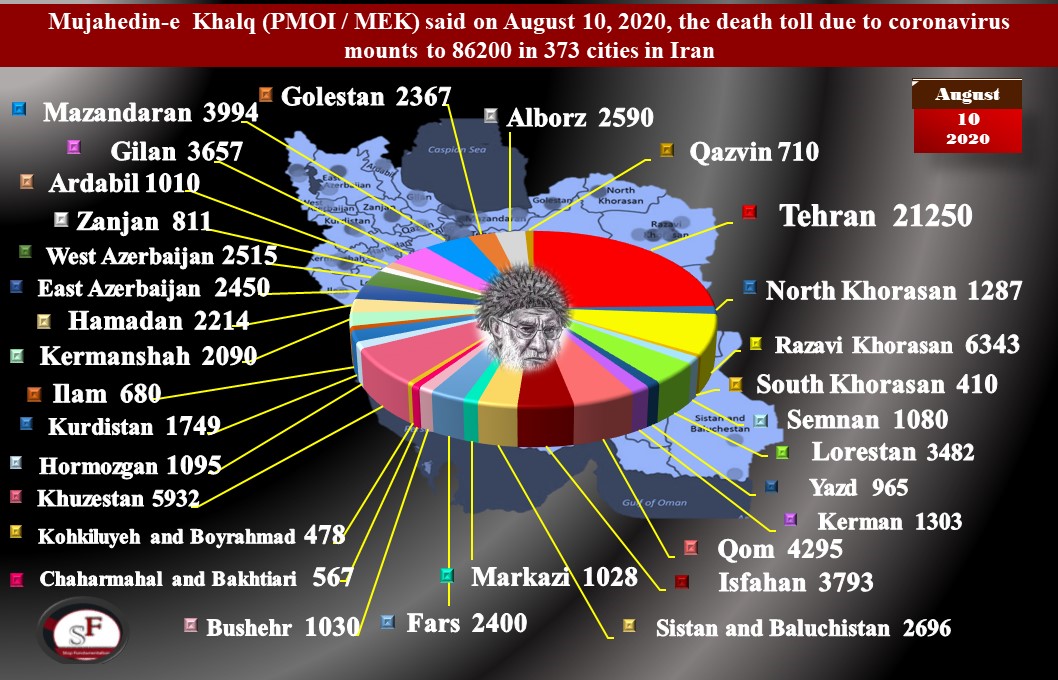 Not long after the news of the global COVID-19 pandemic broke, the People’s Mojahedin Organization of Iran (PMOI / MEK Iran) knew that the Iranian regime was going to downplay the gravity of the situation should Iran be affected.

Iran, of course, was not spared and it is still to this day dealing with high numbers of sick people.

The (PMOI / MEK Iran), since the start, has been recording the death toll, keeping in contact with health professionals the whole way across the country to be able to report accurately on the latest developments.

As expected, the Iranian regime has been completely dishonest about the outbreak, underreporting on the death toll and failing to take action to protect the people of Iran.

The People’s Mojahedin Organization of #Iran (PMOI/#MEK) announced on August 10, 2020, that the #Coronavirus fatalities in 373 cities across Iran had reached 86,200. #COVID19 https://t.co/AxcuoFNFIH

According to the (PMOI / MEK Iran), more than 86,200 people have died so far, whereas the regime is claiming that 18,427 have died. This is just a fraction of what the (PMOI / MEK Iran)  has been able to establish, showing that the regime has no qualms about deceiving its people and the international community. The number of people that have died in Khuzestan alone stands at almost 6,000.

And as the regime always does during times of crisis, it looks for a scapegoat. The scapegoat in the current health crisis is the people themselves. Iranian President Hassan Rouhani said that when more than three-quarters of the people complied with health protocols, the death toll started to drop. However, he claims that compliance went down to 17 percent and an increase in cases was noted.

The regime grossly mismanaged the situation since the first cases of the virus were detected in the country. Many regime officials have denied that the fault lies at the government, but some have spoken out. A member of the Coronavirus Task Force said at the weekend that the government had other priorities at the time the first cases were detected in Iran.

Mohammad Reza Mahboubfar said: “We witnessed the first patients suffering from Covid-19 exactly a month before the official announcement of this virus entering the country, meaning around mid-January. However, at the time the government concealed this due to political and security reservations.” He said that this lack of transparency with the public has caused the situation to get to a very serious state.

Dr. Mohammad-Reza Mahboubfar, a viral epidemiologist said that the “figures announced by the Ministry of Health were just 1/20th of the real figures”.#Iran#COVID19 https://t.co/b9OmYXXXrU

He also said that he believes the figures being announced by the regime are highly inaccurate. Mr. Mahboubfar said: “In my opinion, the numbers reported by the Health Ministry are one-twentieth of the true figures.”

Even the deputy Health Minister has expressed doubts about the official figures. Iraj Harirchi said that he believes the true figures are double what the Ministry of Health is reporting.

Another member of the Coronavirus Task Force said that the situation in Tehran is getting worse and that hospitals are working at full capacity. Minoo Mohraz said yesterday that the efforts to confront the virus were loosened and that the virus became more powerful as a result.