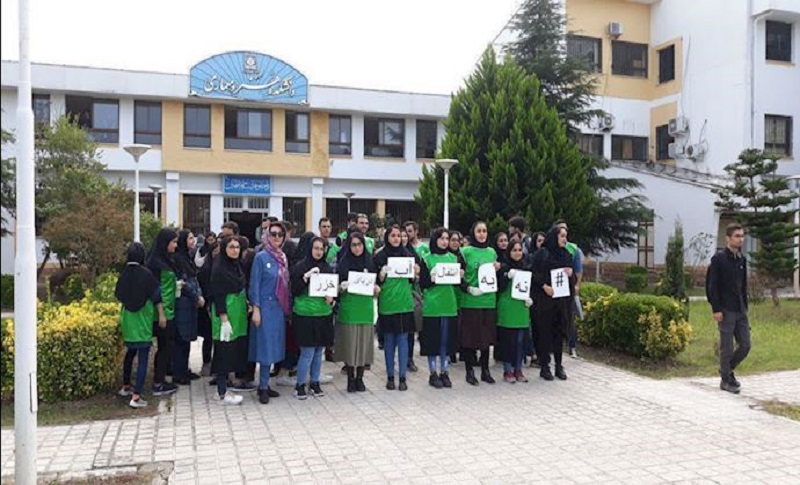 A number of protests and rallies have been taking place across Iran, with large numbers protesting the mullahs and the corruption that is making their lives tougher and tougher.

On Tuesday 22nd October, a number of students held a rally in protest against the regime’s plans to transfer water from the Caspian Sea to the city of Semnan which is hundreds of miles away. The students of the Arts and Architecture School of Mazandaran University in Babolsar in the northern part of the country were holding placards objecting to the regime’s projects that are taking water away from the local area.

On Saturday 19th October, environmental activists gathered on the beaches of the city to voice their concerns about the same issues.

The PMOI / MEK, the main opposition to the Iranian regime, has been concerned about the environmental impact of the regime’s policies with regards to the Caspian Sea for years. In a message on social media, the PMOI / MEK highlighted that the mass of water is being shared meaning that the people of Iran are getting a smaller and smaller share.

RFI
Most of the Caspian Sea is now shared, leading to increasing power for Russia & a smaller share for #Iran pic.twitter.com/Z66KbO2YFa

Meanwhile, on Monday 21st and Tuesday 22nd October, workers from the Farabi petrochemical site in Bandar Mahshahr in the southwestern part of the country continued with their strike. They demonstrated outside the premises and the workers called on the regime to ensure that they finally receive their long-overdue pensions and wages.

In the Gilan Province in the northern part of the country, workers at the Damash Mineral Water factory held a rally.

They too were protesting for the payment of their overdue wages. Reports indicate that they have not been paid for three months. Furthermore, the number of these factories has decreased rapidly in the space of just a few months. Not that long ago, 140 were in operation – now just 30 are.

In the West Azerabaijan Province, villagers living close to the city of Miandoab were protesting on Tuesday 22nd October. They were calling on the regime to halt the transfer of sewage from the city to their villages. Instead of supporting the people with their reasonable requests, the mayor of the city warned the people that the project would go ahead. He threatened them: “If needed, I’ll use bulldozers to run you over and transfer the sewage water here.”

Meanwhile, people all across the country have been celebrating the election anniversary of Mrs. Maryam Rajavi, President-elect of the National Council of Resistance of Iran (NCRI). Iranians across the country bravely voiced their support of the leader of the Resistance that will one day guide the country through the transition period once the regime finally collapses.

Supporting the Resistance is considered a crime by the Iranian regime and it is punishable by execution, highlighting just how courageous the people are and how determined they are to rid the country of the leadership that is destroying their country and spreading chaos across the region. The people are certainly going to be the major force behind eventual regime change.