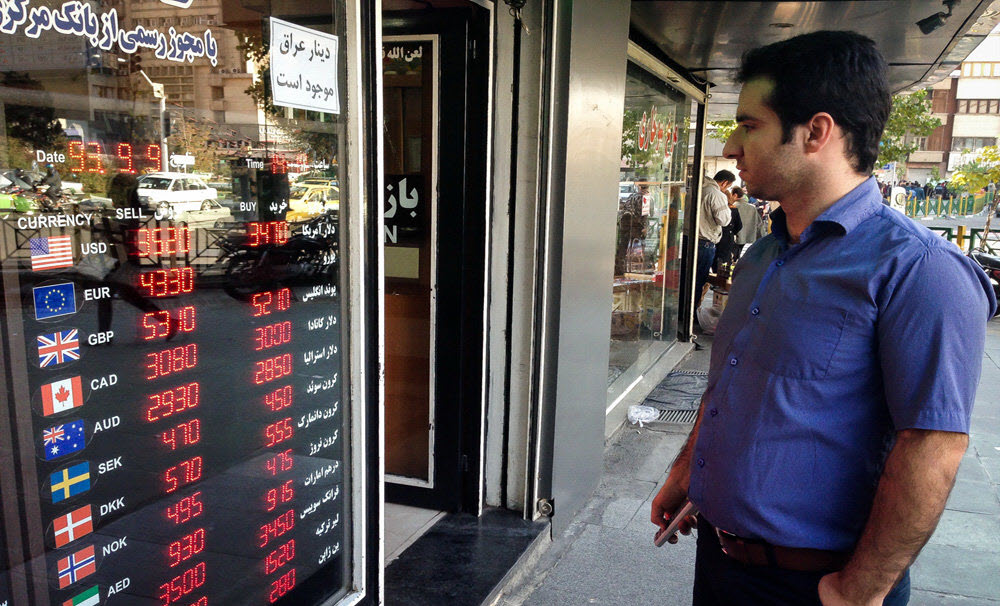 Over the past weekend, Iran’s currency, the rial, plunged to a new record low, dropping to 112,000 rials to a single U.S. dollar.

The devaluation of the rial has been steady since the Trump administration’s decertification of Iran nuclear agreement because of the regime’s continued support of terrorism, development of ballistic missiles, and its human rights record.

Cancellations of contracts by Asian and European companies worried about the sanctions are crippling the economy and the Iranian regime.

On Saturday, the exchange rate was 97,500 rials, but fell to the 112,000 level on Sunday — a one-day plunge of 12.5 percent, according to foreign exchange website Bonbast.com. According to Reuters, other websites said the dollar was exchanged between 108,500 and 116,000 rials.

According to an editorial by Steve H. Hanke of John Hopkins University in Forbes vast sums of U.S. currency have been hoarded by the ruling mullahs and the Revolutionary Guard Corps. They could handsomely profit enormous sums. Therefore, the regime’s leadership and military could weather the chaos.

Inflation in Iran has grown, as well. According to Hanke, Iran’s implied annual inflation rate has surged to 203 percent; almost twenty times higher than the official inflation rate of 10.2 percent.

Now the regime threatens and attacks the US with rhetoric, but offers little else in the face of the coming sanctions.

Mohammad Javad Zarif, the Iranian regime’s Foreign Minister, claims that Tehran regime can survive the sanctions. State-run ISNA news agency quoted him as saying, “We have enough power to show the United States that it should abandon this addiction. We believe that the world has come to the conclusion that the United States should overcome its dependence on sanctions.”

He asked the European Union to intervene and act in the interests of its member-states and stop following the policy of President Trump.

Still, the Iranian people have been staging many protests, and seem to believe that enough is enough. They seek real democratic reforms.

It has been reported that the regime is preparing to launch its own cryptocurrency to circumvent the decline in the rial, according to Alireza Daliri, of Iran’s Directorate of Deputy of Management and Investment Affairs. He said that several domestic companies are developing a digital currency and will launch it after fixing several persistent flaws. He added the unnamed companies are coordinating with the Central Bank of Iran. He told ISNA news agency they were trying to prepare the grounds to use the virtual currency in the country and that the digital currency would help the country to transfer money anywhere around the world. It will also help the nation during the U.S sanctions.

The Iranian regime has also announced plans to offer price and tax incentives to private investors to take over stalled state projects in an attempt to boost the economy. These projects are mostly those originated by foreign companies who have now have fled Iran in run-up to the sanctions.

Vice-President Eshaq Jahangiri told viewers on state television that the plan will offer attractive prices and flexible terms, as well as tax holidays for investors. “Over the past few months, the country’s liquidity has gone into housing, foreign exchange, and gold coins, raising prices and provoking public concerns,” Jahangiri said.