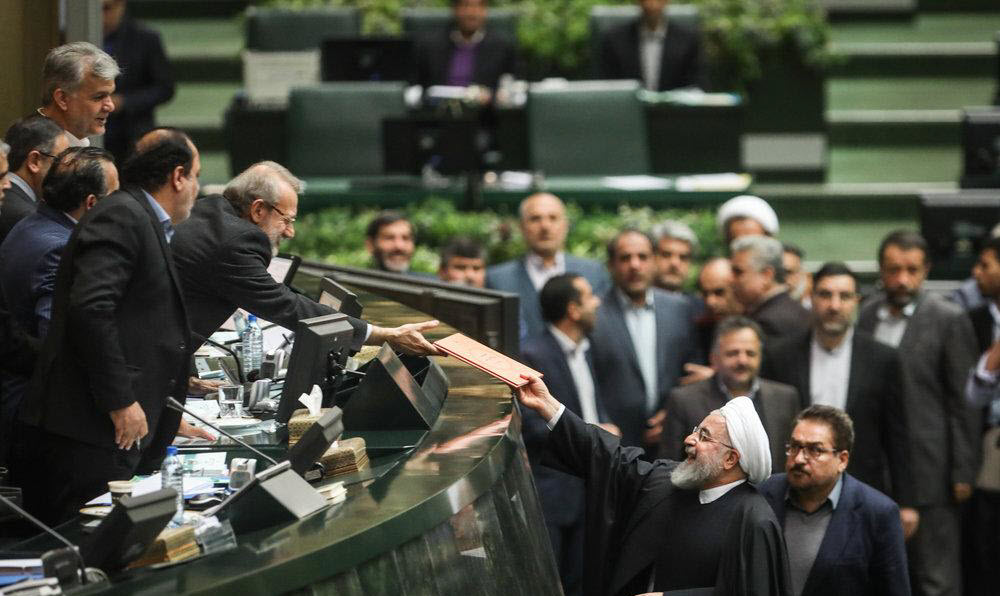 The Iranian government proposes a budget bill to the country’s parliament (Majlis) at the end of every year. Once the bill passes, a clerical body must also approve the legislation. Then, Iran’s Central Bank presents monetary and credit policies that correspond to the budget.

The budget bill gives policy analysts, scholars, and politicians, information about the Islamic Republic’s current financial and economic status, as well as its prospective missions and specific objectives. This is why examination of Iran’s budget is critical. The proposed budget for this year is distinct from those of prior years.

The current bill is designed to significantly assist the ordinary people by increasing the minimum wage, creating jobs, raising the employment rate, and resolving people’s economic problems, according to Iranian officials. Iran’s official broadcaster, who presented the regime’s budget for March 2019 to March 2020 stated, “The government intends to increase the wages of employees in tandem with increasing the employment rate for the youth, all the while keeping the prices for gas at the 10,000-rial (10 cents) level and making sure that supervision is made in a way that goods reach people with cheap prices.”

However, Iran’s educated youth population cannot find jobs. According to an official representative of the regime’s Planning and Management Organization, “42 percent of unemployed people in Iran have a university degree, and huge sums of money have been spent on their education.”

As well, Harvard-educated Iranian-American political scientist, Dr. Majid Rafizadeh, president of the International American Council, believes that “from a realistic point of view, the Iranian leaders’ promises are impossible to fulfill.”

2019’s proposed budget is about 45 percent of the country’s budget for 2018, which is unprecedented in the history of the Islamic Republic. President Hassan Rouhani’s budget bill for 2018 was approximately $104 billion. The current budget bill is roughly $47.5 billion.

Dr. Rafizadeh writes, “Iran’s increase in IRGC funding, while many other sectors have witnessed drastic cuts, points to the regime’s determination to prioritize its revolutionary principles over its citizens’ needs.”

US President Trump’s exit from the Joint Comprehensive Plan of Action, commonly known as the Iran nuclear deal, and his decision to renew the primary and secondary sanctions against the Islamic Republic is part of the reason for the decline. And, although Iranian leaders deny any impact from the sanctions, but it is clear that they have put significant pressure on Iran’s economy, specifically its energy and banking sectors.

“Iran’s revenues have already started sinking, and will likely continue to fall. Since the US withdrew from the nuclear deal, Iran’s oil revenues and exports have fallen approximately 50 percent,” according to Dr. Rafizadeh.

Additionally, Iran’s national currency, the rial, has dropped to historic lows. in early 2018, one US dollar equaled approximately 35,000 rials. Now is it worth nearly 110,000 rials. The International Monetary Fund confirms that Iran’s economy is officially in recession.

The export of oil accounts for a significant portion of Iran’s budget, as the regime estimates that it will export nearly 1.5 million barrels per day at $54 per barrel.

1. The Islamic Republic is less likely to gain this revenue because Tehran’s oil export market is declining and the regime is incapable of trading with US dollar.

2. Iranian leaders, particularly Supreme Leader Ali Khamenei, emphasize that the nation has a resilient economy independent of oil sales, but the current budget bill shows that the government has not made any tangible advances in fulfilling such promises.

The country’s five-year development plan normally incorporates Iran’s budget bills, and the last one — for 2016 to 2021— prioritized education, health, and technology. The current budget bill shows cuts for these sectors. Health Minister Hassan Ghazizadeh Hashemi has resigned over the proposed budget and the cuts it entails. He stated in a video published on Khabar One news, “I am not an impatient person, but enough is enough.”

Iran’s proposed budget reveals that Tehran is facing an economic crisis, but one institution has seen a noticeable increase in its budget — the Islamic Revolutionary Guard Corps (IRGC). Dr. Rafizadeh writes, “The increase in the IRGC’s funding, while many other sectors have witnessed cuts, points to the regime’s determination to prioritize its revolutionary principles over its citizens’ needs.”