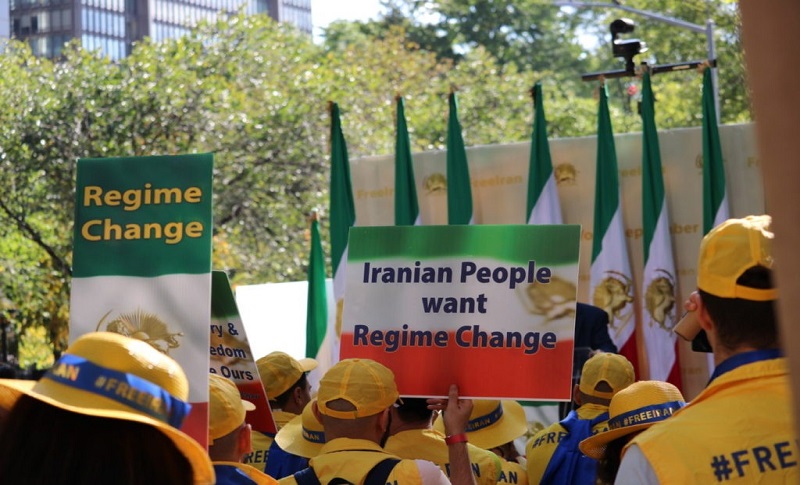 On Tuesday, 24 September 2019, thousands of Iranian Americans, supporters and sympathizers of the Iranian opposition group People’s Mojahedin Organization of Iran (PMOI/MEK), gathered in New York to protest against Iranian regime’s President Hassan Rouhani visit to annual meeting of world leaders in U.N. Headquarters, and to echo the Iranian people’s desire for regime change by their own resistance, the MEK.

The “No to Rouhani” rally was organized by the Organization of Iranian American Communities (OIAC). Iranians called on the U.N. and the member states to recognize the right of the Iranian people for a republic based on a separation of religion and state, and a society based on gender equality and respect for human rights. 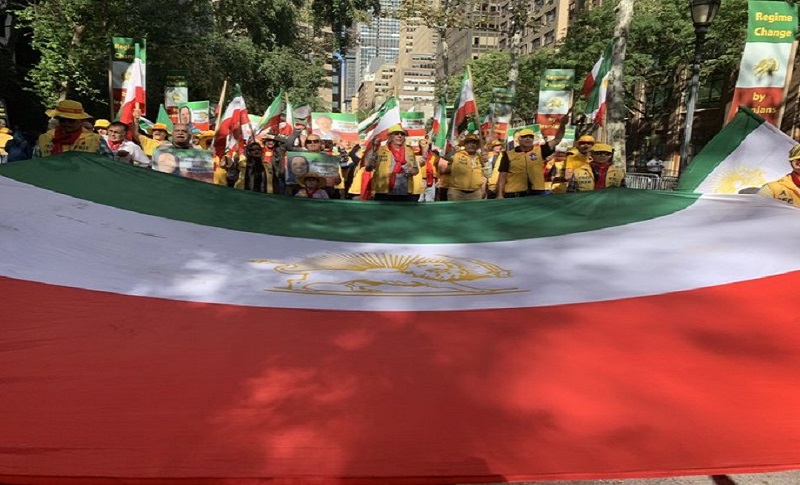 The protesters chanted “down with Rouhani”, “down with Khamenei” and “down with religious fascism.” Prominent American leaders such as Rudy Giuliani, former mayor of New York, and former U.S. Senators Joe Lieberman and Robert Torricelli spoke at the rally. 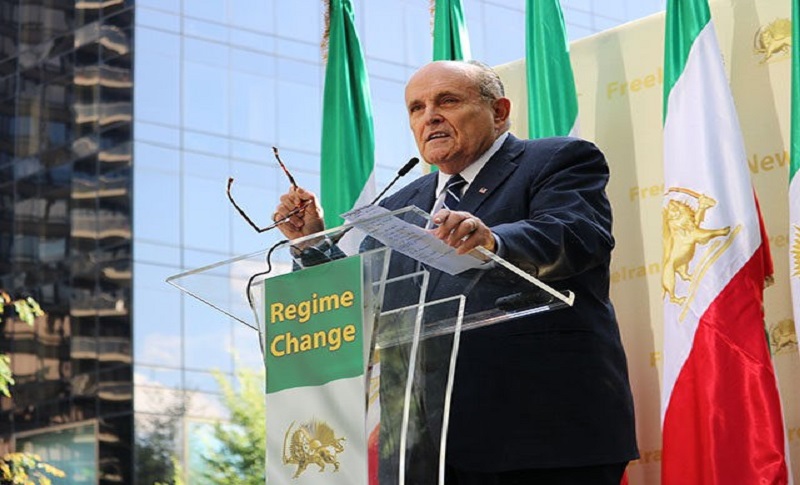 The Iranian protesters demanded the exclusion of Rouhani and the Iranian regime from the U.N. With regards to its export of terrorism, warmongering in the middle east, attacking oil facilities, hijacking oil tankers and nuclear blackmailing, the mullahs’ regime ruling in Iran is a threat to the world peace and security.

The Iranian American protesters emphasized that the seat of Iran at the U.N. belongs to its democratic opposition to the National Council of Resistance of Iran (NCRI). They announced their full support for nationwide protests inside Iran with the aim to overthrow the barbaric regime ruling Iran and to establish freedom, democracy, and gender equality.

The speakers at the rally announced that the perpetrators of the massacre of 30,000 Iranian political prisoners in 1988 must face justice. At the time, Ruhollah Khomeini, the founder of the mullahs’ regime ordered the mass execution of all political prisoners in Iran’s prisons. The officials who carried out the bloody deed continue to serve positions of power in the regime today.

Mrs. Maryam Rajavi, the President-elect of the NCRI, sends a video message to the “No to Rouhani” Rally. “Your gathering is a resounding ‘No!’ to the presence of the representative of the religious fascism at the United Nations, a person that is proud to kiss the hands of the regime’s Supreme Leader and the IRGC. It is a decisive ‘No’ to the policy of appeasement vis-à-vis the mullahs, to the policy of buying chances for a regime on the verge of demise, and to the policy of inaction toward a regime that preserves its power through warmongering, terrorism, and suppression. Your gathering says ‘No’ to the continuation of the rule of a bunch of occupiers and thugs in Iran. And, it says ‘Yes’ to the overthrow of this regime by the Iranian people and the Iranian Resistance,” said Mrs. Rajavi.

Hail to the political personalities & friends of the Iranian Resistance who participated in the Iranians’ rally across from the UN to support the Iranian people’s legitimate struggle for freedom and democracy. As always, you are a source of encouragement to the people of #Iran.

Mrs. Rajavi added, “following the recent attack of the clerical regime from inside Iran against Saudi oil facilities using missiles and drones, the real question facing the international community is no longer about who conducted the attack, but the imperative to advance a policy of complete decisiveness and firmness against this regime.”

“Coddling the mullahs is a policy that has fostered catastrophes and there is only one way to undo the damage and that is to stand on the side of the Iranian people who have risen up to uproot the central banker of terrorism,” said Mrs. Rajavi.

She made clear that this regime is neither capable of reform nor can it change its behavior. “It will never abandon weapons of mass destruction, human rights violations, and promotion of fundamentalism and terrorism; and, it will get emboldened as a result of appeasement, and it only understands the language of firmness and strength,” Mrs. Rajavi said.

Mrs. Rajavi warned that “the regime is weak and at an impasse. Its adventurism and evil acts in the region are expanded only because no other party has stood up to it.”

In his remarks at the rally, Mr. Giuliani said, “The NCRI can take over and run Iran like no other regime change models and the Iranian opposition coalition can transition Iran from a regime of terror to a regime of democracy and freedom. It will end capital punishment and restore respect for women’s rights.”

“The [Iranian] regime’s aggressions still continues—our policies won’t change the behavior. It’s regime change that can solve the Middle East bloodshed. The NCRI’s ten-point plan is a guarantee for a prosperous, democratic and nuclear-free Iran. The NCRI has the broadest support in the U.S. and around the world,” said Senator Lieberman, who is also a former U.S. vice presidential nominee.

What happened at Dag Hammarskjöld Plaza was to show the world that the mullahs’ regime ruling Iran does not represent the Iranian people. Rouhani is a hangman of the Iranian people and during his tenure as president, more than 3,800 people have been executed.

Hassan Rouhani’s remarks at the U.N. showed the impasse the Iranian regime is facing. He was begging for a meeting with U.S President. In a tweet, he said “For 1.5 years, the US Gov has sought to deprive Iran of its right to access the world economy by threats & extra-territorial sanctions. We once negotiated under sanctions. We will not do so again. Halt the #sanctions and return to your commitments so the dialogue may reopen.”

“Iran wanted me to lift the sanctions imposed on them in order to meet. I said, of course, NO!” responded the U.S. President Donald Trump in a tweet.

The solution for Iran that since many years ago the Iranian Resistance is presenting, is “No to War”, “No to Appeasement.” The only solution for Iran is a democratic change by the people of Iran and their organized resistance, the MEK.