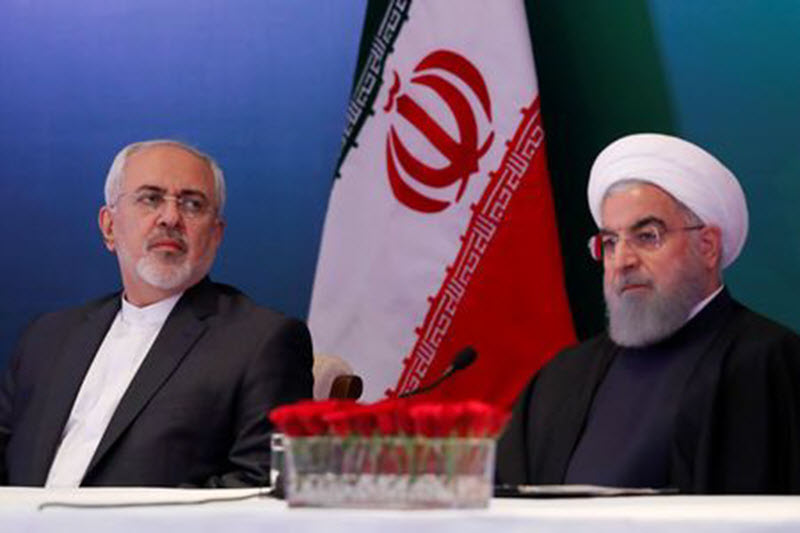 An Iranian delegation, including President Hassan Rouhani and Foreign Minister Mohammad Javad Zarif, is visiting Iraq for three days this week before heading to Syria at the invitation of Syrian President Bashar Assad, as part of a tour to show that Iran has good relations with its Arab neighbours and promote unity after Zarif’s shock resignation scandal earlier this month.

Zarif resigned via his official Instagram during Assad’s visit to Tehran, reportedly because he wasn’t told about or invited to a meeting with Assad after senior members of Iran’s terrorist Quds Forces persuaded Assad to visit without the knowledge of the country’s diplomats. Quds leader Qassim Solimani greeted Assad alongside Khamenei and Rouhani.

Supreme Leader Ali Khamenei refused his resignation, supposedly because Zarif’s absence would have damaged the Regime further, and Zarif had to withdraw it. Zarif is considered a skilled diplomat with extensive knowledge of the West and therefore essential to preserving what is left of the West’s appeasement policy towards the Regime.

It is also important to not the Rouhani still has two years before the next presidential election and, given the ongoing infighting, it is unlikely that he will survive without Zarif’s support. It’s hard to tell whether he can survive even with the support.
What will happen to Solimani?

However, the scandal may not be over. After Zarif left for Iraq to prepare for Rouhani’s arrival, Khamenei awarded the Order of Zol-Faqar – the highest-ranking military award in Iran – to Solimani, which is believed to be part of a plan to increase the profile of the Revolutionary Guards, which included the Quds. This shocked the Iranian people because this awarded has not even been mentioned in the past 40 years of the Iranian Regime.

Khamenei even said that Iran’s regional ambitions were more important than relations with the West and that he trusts militiamen, like Solimani, more than politicians. This is not surprising given how influential Solimani has been to Iran’s regional take over, as the driving force behind Iran’s presence in Iraq and Syria, a commander in the Hezbollah-Israel war of 2006, and various roles in Iran’s movements in Afghanistan, Central Asia, and the Middle East.

This is believed to be an indication that Khamenei intends to let Solimani run in the next elections, which is consistent with the increased domestic repression and regional interference. Although, it’s important to remember that no matter who the President is, all of the power flows from the Supreme Leader.