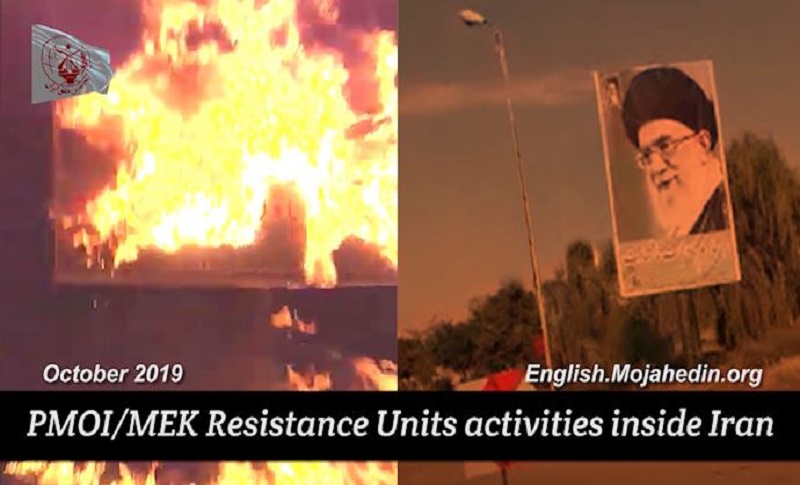 According to the website of the People’s Mojahedin Organization of Iran (PMOI/MEK), at the beginning of the new academic year, brave Iranian youth torched posters and pictures of the regime’s supreme leader Ali Khamenei. They also set fire to banners and post signs of the Islamic Revolutionary Guard Corps (IRGC) and Bassij Force in 17 various cities.

Since the nationwide uprising in December 2018, MEK’s resistance units have played a major role in keeping the flame of resistance alit.

The protest erupted across Iran because of the economic injustice, systematic state corruption, and suppression of freedom. MEK’s resistance units prevented the regime from stifling the voice of the demonstrators.

As a result, the protests continued across Iran until today and protesters are calling for the overthrow of the regime. This is a goal that the MEK and the National Council of Resistance of Iran (NCRI) have been striving for many years.

The MEK’s Resistance Units are a symbol of Iranian people’s desire and dream to free their country. They wish to establish an Iranian nation that seeks freedom and democracy, and they will achieve it from inside Iran and through their own resistance.

On July 11, 2019, On the eve of the annual event of the MEK in its headquarter in Ashraf 3 in Albania, the Ministry of Intelligence and Security (MOIS) arrested a number of MEK’s families members and supporters in Iran.

Activities of PMOI-MEK Resistance Units in Iran- A poster of the President-elect Maryam Rajavi, hung from an overpass in Mashhad.

Nevertheless, the regime couldn’t prevent the increasing numbers of Resistance Units and indispensably had to confess to MEK’s active role in recent protests.

In January 2019, during a speech in Qom, the Iranian regime supreme leader Ali Khamenei indirectly expressed his fear for the growing influence of MEK and the resistance units in organizing protests in the streets of Iran and spreading the news of protests and demonstrations in social media channels.

“The arrogant are inviting people to confront the system. It’s necessary that the people stand up in front of this publicity and move against it. The youth must transform cyberspace into a tool against the enemy,” said Khamenei.

At that time, Javan newspaper, affiliated to the IRGC wrote: “The Trump administration’s policy is aligned with the most serious Iranian movement MEK that seeks regime change in Iran; that is why the U.S. sees no difference between hardliners and reformists in Iran.”

These statements are broadcast by the regime’s media after a long systematic silence on the MEK.

However, the regime now has no way except admitting to the role of MEK as the only opposition group that can topple the regime and the alternative to the mullahs’ dictatorship.

Yes, thanks to the Resistance Units, the role of MEK cannot be denied anymore.