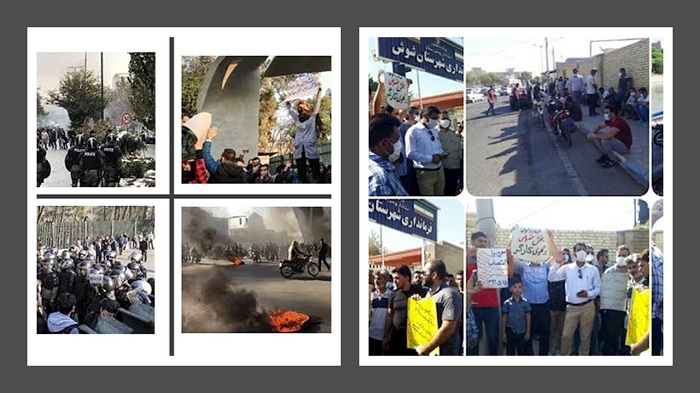 For the 52nd day, workers at the Haft Tappeh Sugarcane Company continued their strike. The workers have several demands about their working conditions and have vowed to continue striking until their demands are addressed.

Firstly, they are calling for the immediate payment of all delayed salaries and the extension to their insurance cover. They also call for the immediate rehiring of their colleagues that were expelled. The workers are victims of another one of the regime’s privatization acts and they are calling for all of the embezzled funds to be returned. And another demand is for the corrupt officials in the company to not only be fired but also to be arrested.

The workers have been marching into the nearby city to make their grievances heard, angry about the treatment that they have been faced with, and the unfair circumstances they have to deal with.

There are also protests taking place in many different cities across the country and the regime is getting concerned that another major uprising could be on the horizon. Even state-run media outlets are reporting on the dire circumstances in the country such as the major economic problems and absolute poverty conditions many are living in and the regime’s widespread corruption.

The Mostaghel publication wrote last week that the general population is finding it more and more difficult to provide for their most basic of needs, while the “four-percenters” (the elite four percent of the population that are increasing their wealth at the expense of the people) are getting “fatter every day”. The publication quite rightly pointed out that these two groups are going to confront each other, and the winner will be the one that has “nothing to lose”.

A sociologist with ties to the regime said during an interview that the young people of Iran are “fed up” and are “waiting”. Amanollah Gharayi Moghadam also pointed out that only a few weeks ago, 12 million tweets on social media called for the regime to halt the execution of three young people that participated in the uprising last November.

?? We deeply regret that the #UnitedStates has today resumed federal executions after 17 years. This runs counter to trends both worldwide and in the US of moving away from the #DeathPenalty.#StandUp4HumanRights pic.twitter.com/ON8acQx2au

Society in Iran is in an explosive state and the Iranian regime is well aware of this. It has been trying to threaten the people into keeping silent, warning that the authorities are going to deal with “rioters” or protesters in a tough manner.

Speaking about the urgency of the situation, a member of the Assembly of Experts recently said that the gap between the leaders and the people is huge and that the “situation is critical”. He said that action needs to be taken otherwise the establishment will “die”.

#MEK #Iran Mullah’s regime has responded to the protests at Haft Tappeh with suppressive force. The factory workers at the Haft Tappeh Sugarcane Company protested for 50 days against the privatization and delays in payment of their wages.https://t.co/J1giRRFiqA #FreeIran2020 pic.twitter.com/XyfNvXud2Q

“Hail to the workers of Haft-Tappeh sugarcane company in Shush who have been on protest and strike for more than 50 days. The clerical regime has abandoned our people in the clutches of disease, unemployment, and poverty. They do not pay workers and nurses’ salaries.

The only solution is replacing the mullahs’ oppressive rule in Iran with people’s sovereignty and the rule of democracy.”