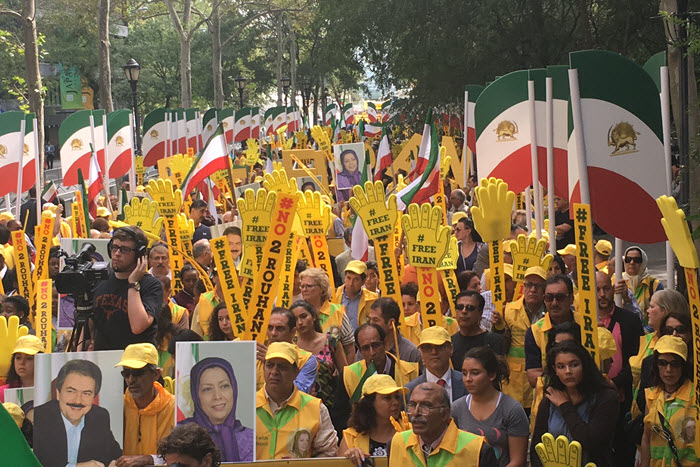 An article in The Media Express has discussed the lack of justice that has been served for the inhumane executions of political prisoners in Iran.

Thousands of Iranian-Americans from all over the United States have joined together in a large rally in New York to express their vehement criticism of the Iranian regime’s president Hassan Rouhani’s upcoming visit to the United Nations.

The rally was planned by the Organization of Iranian American Communities in the U.S. They called on the UN Security Council to “investigate the gruesome massacre of 30,000 political prisoners in Iran in 1988, seen as one of the biggest human atrocities since World War II. They called for the prosecution of regime officials directly involved in the crime against humanity.” The justice minister of Iran, Mostafa Pourmohammadi, recently said he was proud to have been part of the massacre.

The rally included musical performances and a re-enactment of the 1988 mass executions. There was also a “harrowing display” of the pictures of the massacre’s victims.

Rouhani’s presidency is nothing but a continuation of the regime’s past where there have been over 2,500 executions, the arrests of thousands of Iranians, persecution of political prisoners and huge repression against young people and women. Iran now holds the record for the highest rate of executions per capita in the world.

At the rally, participants denounced the international silence surrounding the Iranian regime’s human rights abuses. They say that “western political and economic relations with Tehran should be predicated on a halt in executions by the theocratic regime”.

Former Connecticut Senator Joe Lieberman, the British Barrister and President of the UN Court for War Crimes in Sierra Leone Sir Geoffrey Robertson, QC, who compiled a report on the 1988 massacre and Pastor Saeed Abedini, until recently imprisoned in Iran for his Christian faith, all spoke at the rally.

President-elect of the National Council of Resistance of Iran (NCRI), Mrs Maryam Rajavi, commented. She said: “As long as the United States allows the leaders of a regime that Washington itself describes as the leading state sponsor of terrorism to set foot on American soil, and so long as the United Nations hosts them at the General Assembly instead of arranging for the ruling mullahs to face international tribunals for crimes against humanity, it means that they are standing against the Iranian people’s desire for freedom and democracy.”

She also said that if the Iranian regime is not evicted from Syria, Iraq, Yemen and Lebanon the conflict in the region will continue. “Appeasing this regime and standing on its side is a policy that has harmed the entire world.”

Robertson said: “By mid-August 1988 thousands of prisoners had been killed in this manner by the state, without trial, without appeal, and utterly without mercy. What happened in 1988 was a crime against humanity. Crimes against humanity are of a special hideousness. This dreadful act has never been punished, has never even been investigated… They cannot be forgotten and they cannot be forgiven. There is a duty on the world community represented by the United Nations to take action.”