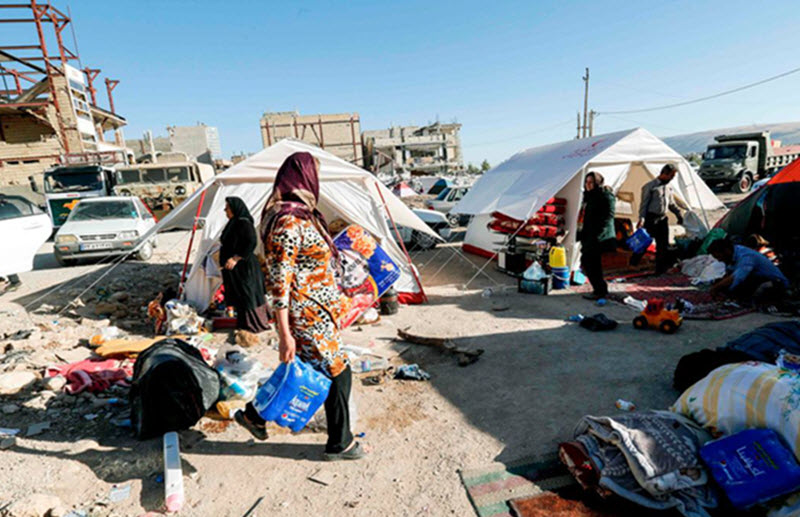 Following the devastating earthquake that hit Iran nearly a year ago, 30% of the people who were left homeless by the earthquake continue to live on the streets in make-shift tents, according to the mayor of Sarpol-e Zahab in Iran’s western province of Kermanshah.

Mohammad Jamali nia spoke about the current situation, “Only the floor concrete placement takes 28 days. Therefore, with a thumbnail account, it can be seen that the repair of all houses will take a lot of time.”

“A lot of time” means that the hundreds of survivors must spend another winter in the bitter cold, and still need essential supplies. This catastrophic situation has led to
some residents reportedly selling their kidneys in order to rebuild their homes.

In a September 14th interview with Ilna news agency on September 14th, Sarpol-e Zahab’s City Council Chairman accused President Hassan Rouhani’s administration of inaction and blamed the inaction for citizens selling their kidneys. He also said, “The mental situation of the citizens is very troubling. Hygiene and sanitation are very inadequate, and the municipality hasn’t yet given us any money to do something. I wish the Ministry of Interior would say what services they’ve provided for a city like Sarpol-e Zahab.”

Irna news agency wrote of the housing situation, “Earthquake-stricken [families] with sick or elderly members or little children are more concerned, because if they don’t succeed in building their shelters, they have to spend a second cold winter in makeshift Conex houses and tents, not to mention the grueling summer heat they have to bear right now.”

Even though the situation is still dire, state agencies are leaving the area. Sarpol-e Zahab’s City Council Chairman stated, “On arrival, many of the agencies which came to the area, put up banners in the city saying that they will stand together with the earthquake victims until the end. Unfortunately, many agencies didn’t stay in the area and declared that they want to leave.”

Kermanshah was hit with a 7.3-magnitude earthquake hit on November 12, 2017, the deadliest earthquake Iran had seen in more than a decade. The quake killed more than 600 people and at least 70,000 more were displaced. Of these people, many died due to the cold weather. In fact, the daily Qanoon reported last year that a 2-year-old girl, Sarina Zahabi, who lived in a tent with her family, lost her life because of exposure.

MP Shehab Naderi said on the Iranian Parliament’s official website, “In addition to Sarina Zahabi, several other children, including an eight-month-old baby, have died of fever and frostbite.”