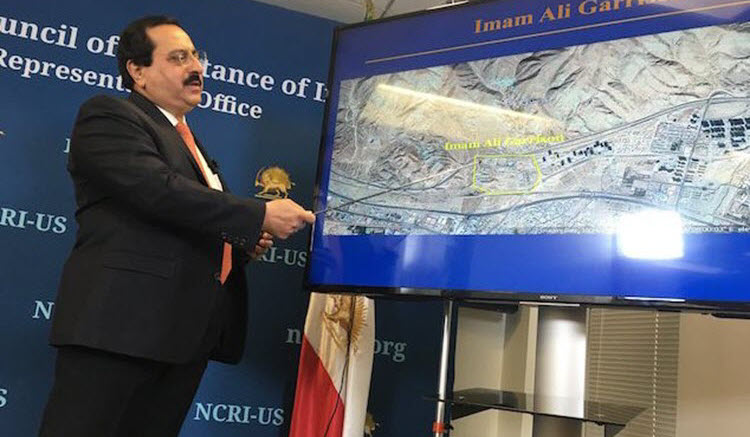 At a press conference in Washington on Tuesday, the Iranian opposition, the National Council of Resistance of Iran (NCRI), provided numerous details about Iran’s extensive ballistic missile program. It revealed the location of twelve sites that the Iranian regime has managed to keep hidden until now.

One site in particular, they said, is highly sensitive and has links to the regime’s nuclear program.

The NCRI obtained the information from the People’s Mojahedin Organization of Iran (PMOI/MEK) which has a sophisticated and extensive network of people inside the country.

The PMOI has revealed numerous critical pieces of information in the past that have been used by US intelligence other agencies and officials. They have gathered information about Iran’s meddling in other countries in the Middle East, its nuclear weapons drive, the numerous and repeated human rights violations and its ballistic missile program.

At the press conference, the NCRI presented satellite images and spoke about experts from North Korea who helped in the setting up of such centres.

The Supreme Leader of Iran specifically tasked the IRGC’s Aerospace unit to accelerate the production of missiles and their testing after the 2015 nuclear deal was signed.

Although there were claims that the IRGC’s missile program was extensive, until now it was not clear to what point. The NCRI identified 42 sites in total, with 15 of them having a direct involvement in the manufacturing of missiles.

Four essential sites are located in Semnan, Lar, Khorramabad and an area near Karaj. The Iranian regime has only admitted the existence of two of these sites.

The site in Semnan (to the east of the capital) has been linked to SPND – the organisation that is tasked with building a nuclear weapon. Numerous tests have been carried out here. In 2011, the NCRI revealed the existence of SPND and three years later it was sanctioned.

The revelation of this information will serve as another blow to the Iranian regime that is still coming to terms with the new, comprehensive sanctions that the US Senate has levied on Iran, especially with regards to its ballistic missile program and human rights violations.

Iran is putting significant efforts into the ballistic missile program, and recently President Hassan Rouhani said that the country will have a new ballistic missile test very soon and that it will be “a thorn in the eyes of our enemies”.

Last weekend, Iran launched several medium-range missiles to Syria to target ISIS. Tension is rising in the region, and for the first time since the Syria war started, Washington shot down a Syrian-regime fighter jet for bombing US-allied ground forces.