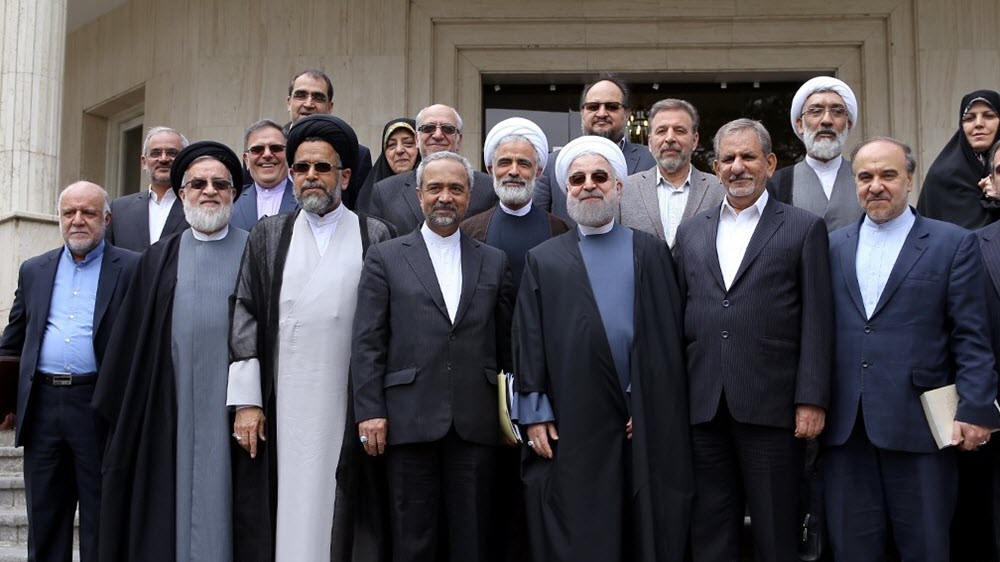 While a reshuffling of the president’s cabinet is unprecedented in the history of the Iranian regime, there have been rare instances of conflicts and clashes within the regime that could described as a ‘re-allocation of positions’. But, it is quite clear for both Iranian people and the regime, that Iranian society’s eruptive state and the course of political, social and international developments are all threatening the very existence of the vilayat-e-faqih regime.

These conditions may be the factors that are forcing the regime to reshuffle the cabinet:

1. A total regime change is demanded by Iran’s general public, and it keeps getting stronger day by day. Rouhani’s Chief of Staff, Vaezi acknowledges this when he said, “The new circumstances require that some cabinet members, who were appointed by the president under normal conditions, to be replaced.”

2. Internationally, the regime is under pressure.

3. Conflicts among the regime are now spreading towards regime’s foundations, a development that is undoubtedly the result of the first factor, namely the people’s nationwide protests.

The three above mentioned developments push the entire vilayat-e-faqih regime deeper into crisis.

Iranian President Hassan Rouhani said in a speech, on Wednesday, July 25th, regarding the outgoing head of the Central Bank, “Mr. Seif was an extremely honest and precious director who fulfilled his obligations quite well. Fighting corruption raised by unauthorized entities will go down in history as Mr. Seif’s achievement. He fought this type of corruption at full power and succeeded to remove this cancerous tumor.”

Seif’s record shows a quadrupled cash flow, a tripled foreign currency rate, a 75 percent decrease in the value of national currency, and the list goes on.

Member of Parliament Ahmadi Lashki reacted to Rouhani’s remarks, saying on on July 24th, “Mr. Rouhani, for how long are you going to tie in the country’s economy with Dr. Seif’s policies? Due to Dr. Seif’s wrong policies, many people have turned against the Islamic regime. When are you going to announce the date at which the failed credit institutions will fully repay their investors? When are you going to stabilize the currency and gold market?”

The Iranian people launched a nationwide uprising in January and never stopped protesting. The days of the West’s appeasement policy has turned into global pressure. The collapse of the country’s economic structure and the conflicts within the ruling class has reached the very foundation of the regime. The cabinet reshuffle is a futile attempt to gain time.