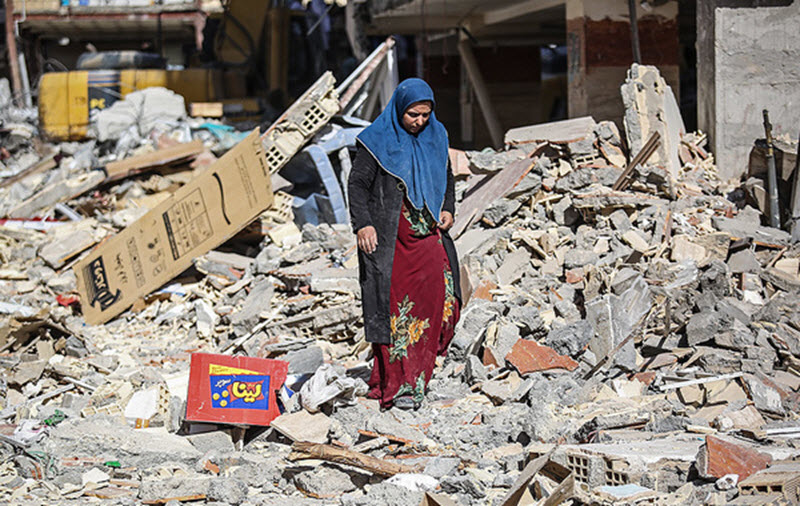 In the aftermath of the horrific tragedy that struck Iran late on Sunday, the Iranian regime has all but abandoned the people that need help urgently. After the devastating earthquake hit the country, the Iranian government, bar a few sympathetic tweets, has failed to react appropriately. Instead, it is trying to cover up the reality of the devastation and is trying to suppress the demonstrations that are taking place in solidarity of all those affected.

The people of Iran are angry, and quite rightly so. After the earthquake, instead of sending help in the form of convoys and forces, the commander of the Islamic Revolutionary Guard Corps (IRGC) Mohammad Ali Jafari and the Basij force commander Ali Fazli were sent.

This is the difficult reality of life in Iran. Instead of relief, the people were met by repressive forces, including the IRGC, who came on motorcycles and anti-insurgency vehicles. Instead of helping the people, the suppressive forces went to the worst-hit areas to stop protests from forming.

As usual, the Iranian regime is distorting the facts and is underreporting about the situation. Some areas of the country have been very badly hit by the earthquake and some 12,000 residential units have been completely destroyed, yet the Iranian regime is saying that there have been 530 deaths. The death toll and the material devastation do not tally up.

Even the people from these areas are saying that the number is much higher. In the town of Sar-e-Pul Zahab, the regime is not reporting that the Red Crescent believes that it is very unlikely that anyone will be found alive under the masses of rubble.

The government aid to retrieve those trapped under the rubble can only be described as negligible. Two days after the earthquake hit, the Iranian regime announced that the rescue operation was over. People were still trying to help the people that were trapped in debris, but despite their best efforts, they simply did not have the right equipment to make much of a difference.

Instead of asking for help from the international community, the government has announced that the situation is under control and everything is back to normal. It called on the people to go back home and to avoid gathering in public.

This is far from the truth. A mayor of a town near where the earthquake hit has said that children and babies are sleeping, without cover, in the streets in the cold weather. They do not even have tents.

Almost two days after the earthquake, the President of Iran, Hassan Rouhani, went to one of the worst affected areas. He said that the people would be given government loans to rebuild their homes.
However, what is being offered to these people is nowhere near sufficient and will not cover even the most minimum of needs. What makes the situation even worse is that the Iranian regime is plundering the people’s money on funding wars abroad. Mercenaries are given more priority than the people of Iran.