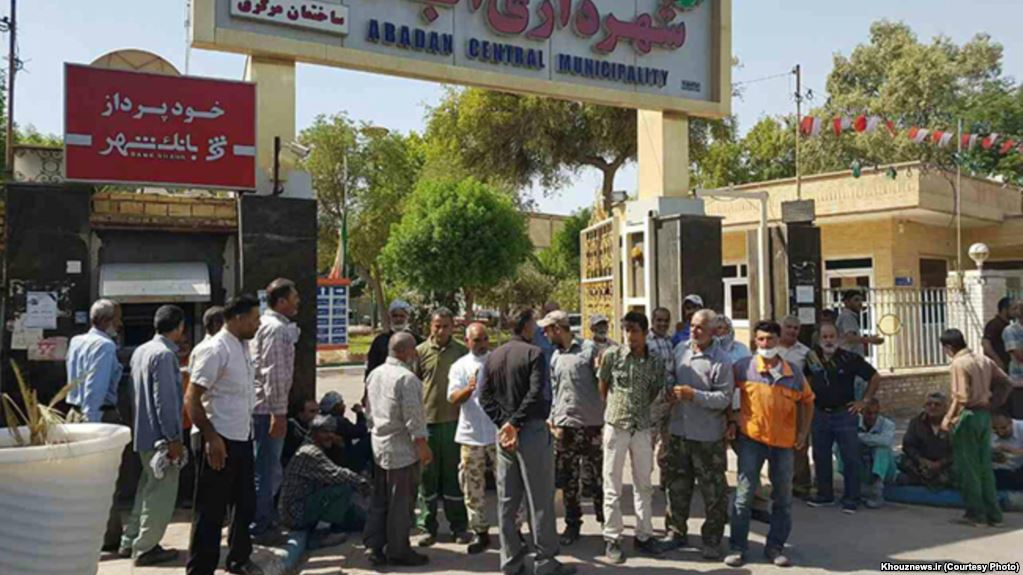 As reported by state-run Iran Labor News Agency (ILNA), in protest of his living conditions, a service worker for the city of Abadan municipality has set himself on fire. Apparently, in addition to financial distress, the worker, Zamen Azarbaijani, had been grappling with problems related to his work environment, but ILNA did not elaborate on the nature of the problems.

The exact location of the incident has not been disclosed, but ILNA published what it said was a photo of Azarbaijani on fire.

Located in the oil-rich province of Khuzestan, rich and prosperous during the reign of Shah Mohammad Reza Pahlavi, Abadan is also the home of what was once the largest oil refineries in the world. The city lost its importance after the 1979 revolution and the devastating eight-year Iran-Iraq War.

It is home to most of Iranian Arabs, and has been the scene of several labor protests.
In recent years, rights activists have reported several cases of Iranian Arabs committing suicide through self-immolation in Khuzestan. The suicides have been blamed on poverty and racial discrimination against minority Arabs, VOA reported.

In fact, on April 20th, a worker who had lost his job at the Farasoo factory set himself on fire at the plant’s compound in the city of Robat Karim, southwest of Tehran. He died two days later at a hospital in Tehran. His colleagues said their 26-year old had been accused of stealing by the factory’s manager. They insisted, however, that there was no decisive evidence against him.

Many Iranian workers are underpaid or receive wages only after long delays. Labor rights activists say that Iranian workers have been forced to go on strike or hold protests, despite the bloody clashes with security forces.

It seems that each day there a protest rally in front of government offices across the country. Iranian workers are attempting to get the attention of the authorities for their problems. However, their demands have fallen on deaf ears according to labor rights activists.

Supreme Leader Ayatollah Ali Khamenei also claimed on April 30, that the United States and Saudi Arabia, are the behind recent labor protests in Iran. Khamenei maintained the “enemies have resorted to economic warfare” after realizing the “futility of military action against Iran,” during a speech commemorating Labor Day.