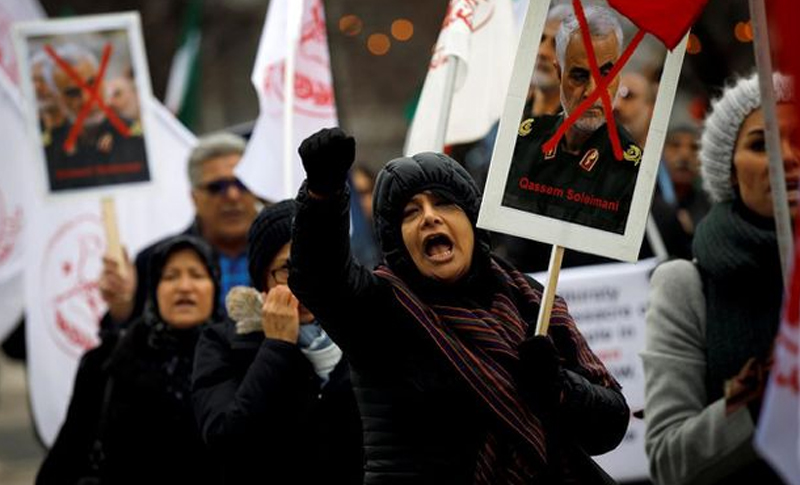 Following the death of Iranian regime terrorist Qassem Soleimani, the majority of the Iranian people were celebrating, despite what the mullahs’ with their staged protests and paid mourners would have you believe.

This is no surprise, considering that Soleimani, who was the leader of the regime’s Revolutionary Guards (IRGC) Quds Force, was responsible for the deaths of hundreds of thousands of people in Iran and around the world.

On Saturday, Fox News aired a report about these celebrations and the anti-regime activities of the Resistance Units of the People’s Mojahedin Organization of Iran (PMOI/MEK). This included putting up posters of resistance leaders Massoud and Maryam Rajavi as well as urging more Iranians to step up to overthrow the regime.

Watch @EricShawnTV on @FoxNews: The #1 terrorist of the #1 terrorist regime https://t.co/fo1kq1s581 Minute 3 of the clip shows posters of @Maryam_Rajavi in Tehran calling on the Iranian people to step up to end the rule of the Ayatollahs in Iran and establish #FreeIran2020.

Eric Shawn, the host of Fox News’ “America’s News HQ”, read out a statement about Soleimani’s death from Maryam Rajavi, the president-elect of the National Council of Resistance of Iran (NCRI).

Her statement read: “Qassem Soleimani was one of the most vicious criminals of Iran’s history. The time has come for the victory of the Iraqi people’s uprising and the liberation of Iraq from the Iranian regime’s occupation.”

Of course, it’s not just Iranians who are rejoicing. Soleimani’s death is being welcomed across the region with Iraqi and Syrian people celebrating as well. After all, Soleimani wasn’t just the face of the regime overseas, he was the regime overseas and was responsible for the murders of countless people across the Middle East.

Maryam Rajavi said earlier that he was “personally involved in the massacre of hundreds of thousands of people in the region and in driving millions of others from their homes”, as well as the “massacre” of the MEK in Camp Ashraf in Iraq, and many other terrorist operations against the Iranian Resistance.

The international community, especially the European Union, must end the policy of appeasement and recognize the right of the Iranian people to resist and rise for freedom to replace popular sovereignty in place of the mullahs’ rule #IranProtests #Iran pic.twitter.com/Bu7AWBS3lM

She said: “The international community, especially the European Union, must end the policy of appeasement and recognize the right of the Iranian people to resist and rise for freedom to replace popular sovereignty in place of the mullahs’ rule.”

Soleimani was killed in a US military airstrike in Iraq in the early hours of Friday, as well as Abu Mahdi al-Muhandis, the head of Iraq’s suppressive Bassij, and several other Iran-linked commanders.