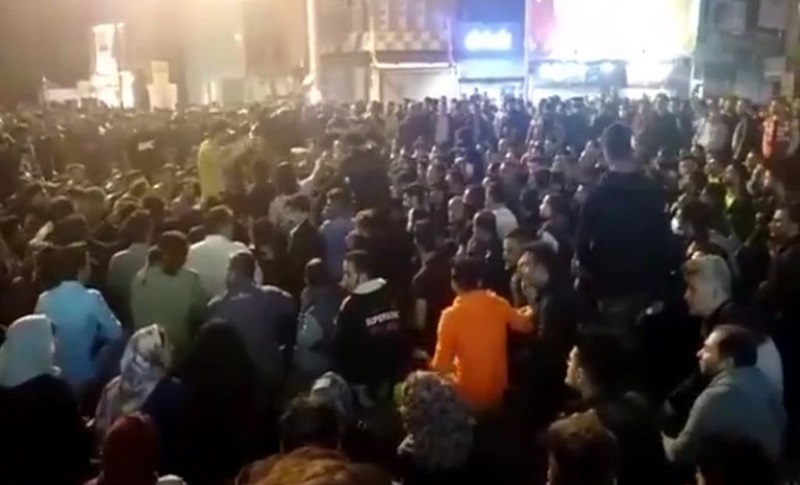 Supporters of the People’s Mojahedin Organization of Iran (PMOI, Mujahedin-e Khalq or MEK) in Iran have been protesting against the regime for quite some time. The MEK, the main opposition to the Iranian regime, has Resistance Units spread across the country ensuring that the voice of the people is heard.

Young people, from Sunday until Wednesday, took to the streets and torched bases belonging to the notorious Islamic Revolutionary Guard Corps (IRGC) and the repressive paramilitary Bassij Force.

The young people and supporters of the MEK also targeted regime seminaries in the capital city Tehran and other major cities across the country including Qazvin, Zanjan, Mashhad, Marand, Behbahan, Hendijan, and Khorram-Abad.

Defiant young people have been increasing their activities against the regime in recent months and this has led to suppressive forces cracking down harder on the people. The security forces have been placed on high alert and have been instructed to react with force.

Ahvaz, southwest #Iran
“Let go of Syria! Think about us!”
Gasoline price hikes by the regime are leading to political protests against the mullahs.#IranProtestspic.twitter.com/oDIPDRwhJi

The MEK has been fighting for freedom, democracy and the respect of human rights for decades. Over the years, tens upon thousands of members of the MEK, and MEK supporters have been targeted by the regime. Many MEK members and supporters have been arrested, imprisoned and executed.

The MEK is the most organized and only viable alternative to the Iranian regime. It is supported by people across Iran and has a large presence both inside and outside the country. One of the main locations for the MEK is in Albania, where they relocated after finally being released from Camp Ashraf (formerly Camp Liberty) in Iraq.

Since being there – in other words, out of harm’s way compared to Iraq where the MEK was subjected to many attacks by the regime, the organization has increased its pressure on the mullahs. The MEK has been calling for justice for the 1988 massacre – a horrific crime against humanity in which more than 30,000 Iranians were killed by the state.

Most of these victims were members or supporters of the MEK. The Supreme Leader at that time issued a fatwa ordering the execution of all political prisoners. Death commissions, as they were called, oversaw the executions where prisoners were basically asked if they support the MEK. If the prisoner refused to denounce their support of the MEK, they were sent for execution.

The most heinous example of the human rights abuses in #Iran is the #1988Massacre of 30,000 political prisoners in which the regime’s former and current leaders have been involved and continue to defend it. Regrettably, to date, they have been immune from accountability.

The 1988 massacre was an attempt by the regime to wipe out the opposition. Or to at least extinguish its determination to overthrow the regime. However, the MEK, rather than taking the massacre as a warning, continued to dissent. Since then, the MEK has grown in size and strength. There are supporters and members the whole way across Iran, as well as the whole way across the world.

The MEK encourages the people of Iran, especially the young people, to go out and protest against the regime’s malign policies. The MEK calls on the people to ensure that they put as much pressure on the regime as possible and to make it clear that this will not stop until the regime is overthrown.