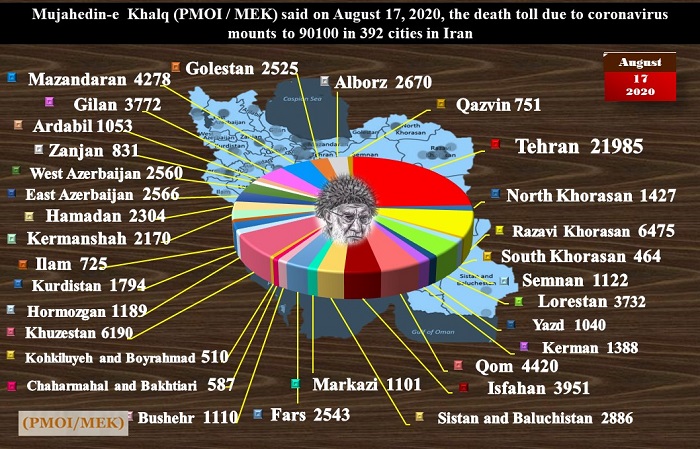 The People’s Mojahedin Organization of Iran (PMOI / MEK Iran), has revealed that the death toll in Iran from COVID-19 had reached 90,100. While ordinary Iranians are being exposed to the deadly virus, the mullahs and regime officials are going out of their way to avoid exposure to it.

President Hassan Rouhani has refused to go to the parliament even though it meant he would not get the votes he needed for his proposed “Minister of Industry and Mines.” As well as that the regime’s “Assembly of Experts” delayed its meeting last week because of the prevalence of COVID-19.

While the mullahs are avoiding contact, they are insisting that the university entrance exams and the mourning ceremony for Shi’ite Islam’s third Imam, Hossain-ibn-Ali, take place. Health officials have issued dire warnings that any such gatherings will only encourage further spread of the virus.

Rouhani however uses the excuse that offices and shopping malls are operating so there is no good reason to cancel other events.

Rouhani has been lying constantly through the pandemic and told the people even at the beginning back in February that it would all be over by the end of the month.

While these disagreements are going on the MEK announced the true death toll from COVID-19 was standing at over 90,000. In addition to the devastation caused by the pandemic, the MEK has said as they have said many times before that the people are suffering serious economic hardships due to the regime’s economic policies.

The abnormal surging trend of the number of #coronavirus victims in #Iran is a product of the criminal policies of Khamenei and Rouhani. pic.twitter.com/TnCBCiRZEc

As the suffering continues the regime even suggested that the pandemic was a ‘’blessing’’ because it brought protests against the regime to a halt. At that point, the regime was getting seriously concerned that the protests last year and in January would ultimately lead to its downfall.

Throughout the pandemic so far, the mullahs have shown poor leadership and have shown that they had no idea what to do. Their complete mismanagement has only increased people’s dislike of them.

Even the state-run media, the Mostaghel daily, reported in mid-July that “This nation will not forget how it was abandoned during these bitter days.  This will affect the upcoming incidents.

The Government did not contain and control the coronavirus to relevantly control the anger of defiant people. But I wish that the suffering and illness of the people were not used as a cure for obliviousness and a means of revenge for the events of November and December. Because soon, people will come to their table for eating, and their despair of an empty table will lead them to protest on busy streets.”

More than 90,100 people have died of the novel #coronavirus in 392 cities checkered across all of Iran’s 31 provinces, according to the Iranian opposition PMOI/MEK.