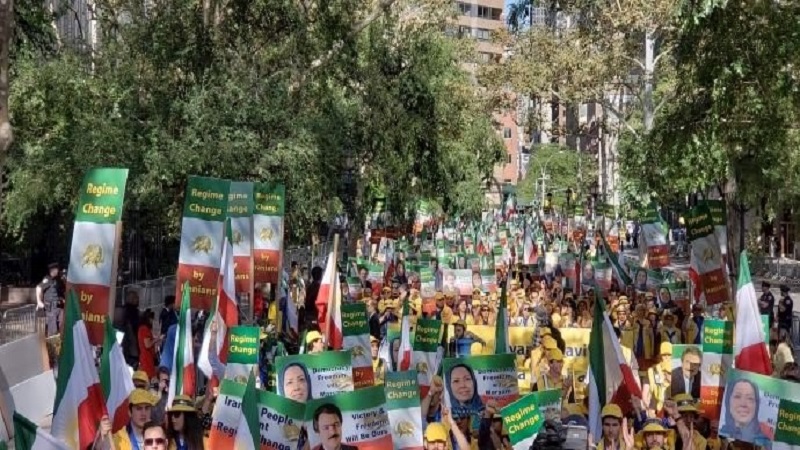 On Tuesday, September 16, 2019 thousands of Iranian Americans, mostly supporters and sympathizers of the National Council of Resistance of Iran (NCRI) and the People’s Mojahedin Organization of Iran (PMOI/MEK), gathered in Dag Hammarskjöld Plaza to protest against the visit of Iranian regime President Hassan Rouhani to the United Nations Headquarters in New York.

Iranians protested to echo the continuing violations of human rights in Iran, especially under Rouhani’s term, when Iran has the highest executions per capita in the world and is known as the central banker of international terrorism. The supporters of the Iranian resistance emphasized the mullahs’ regime ruling Iran does not represent the Iranian people and its seat in the UN belongs to the true representative of the Iranian people, the NCRI and its president-elect Mrs. Maryam Rajavi. 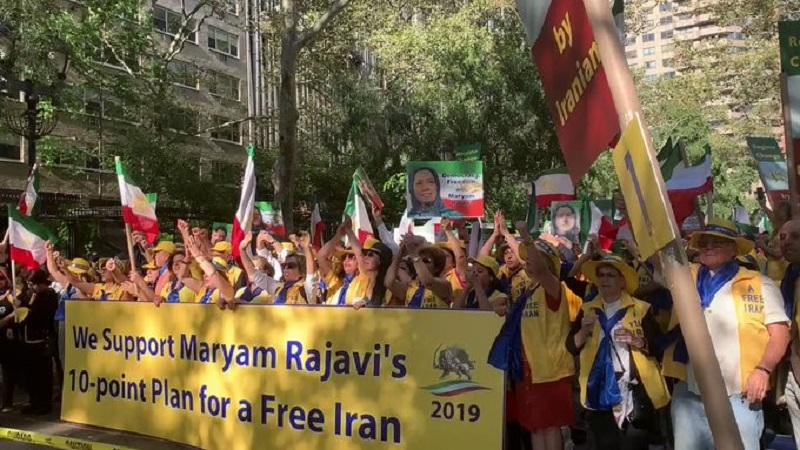 Dr. Ramesh Sepehrrad, spokesperson of Organization of Iranian American Communities (OIAC) told the crowd “The 2009 2018 uprising was the defiance of the regime in its entirety.” 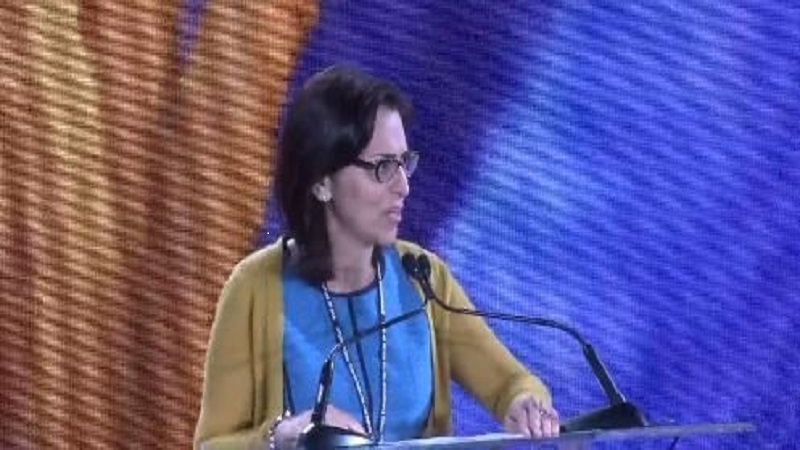 Iranians further demanded that the mullahs’ regime president Hassan Rouhani should be sanctioned alongside Supreme Leader Ali Khamenei and Foreign Minister Mohammad Javad Zarif, and face an international tribunal for their role in crimes committed by the religious fascism ruling Iran in the past 40 years. 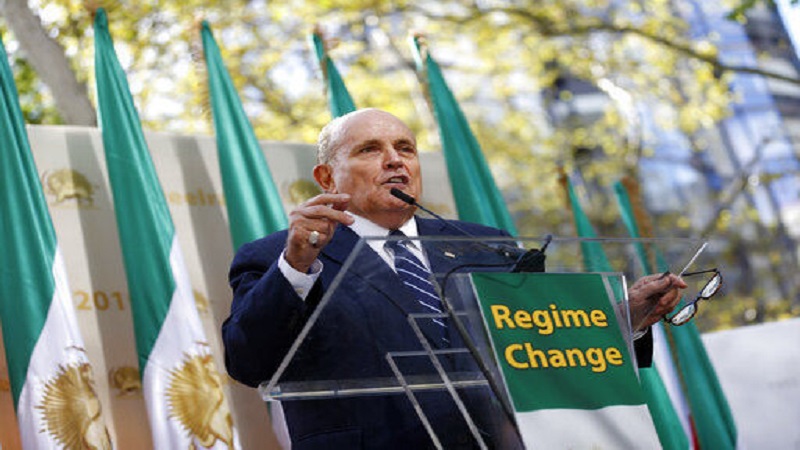 Prominent American political and spiritual leaders spoke at the rally.

Rudy Giuliani, the lawyer of U.S. President Donald Trump and former mayor of New York said in his remarks that “the NCRI can take over and run Iran like no other regime change models and the Iranian opposition coalition can transition Iran from a regime of terror to a regime of democracy and freedom. It will end capital punishment and restore respect for women’s rights.” 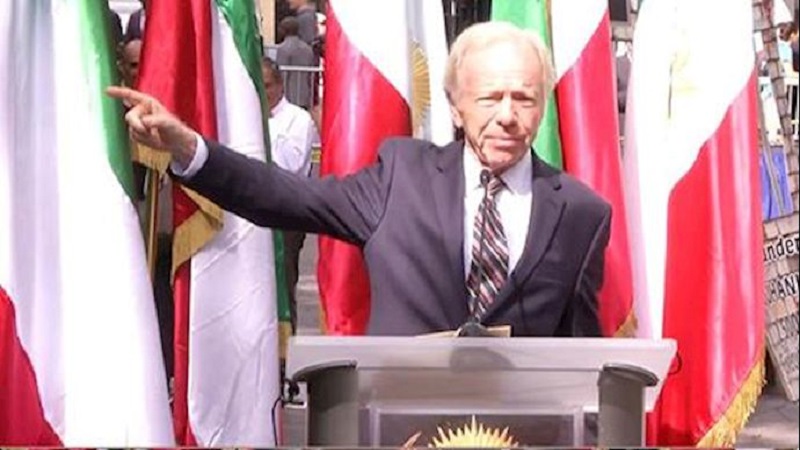 “The [Iranian] regime’s aggressions still continues—our policies won’t change the behavior. It’s regime change that can solve the Middle East bloodshed. The NCRI’s ten-point plan is a guarantee for a prosperous, democratic and nuclear-free Iran. The NCRI has the broadest support in the U.S. and around the world” said Senator Joseph Lieberman, former U.S. vice presidential nominee.

Mrs. Maryam Rajavi the president-elect of the National Council of Resistance of Iran sends a message to the demonstration by Iranian Americans.

Mrs. Rajavi said in her message the “No to Rouhani” rally in New York is the “voice of protest and resistance by the Iranian people, a movement whose latest signs were evident in recent days through the brave workers at the HEPCO factory marching in the streets of Arak.”

She also called the protesters the voice of the “Resistance Units and Councils of Resistance who through their courageous activities across Iran have kept the flames of uprising and protests alive.”

Mrs. Rajavi acknowledged that following the attack against Saudi Arabia’s oil facilities, the real question the international community is facing is how to “advance a policy of complete decisiveness and firmness against this regime.” 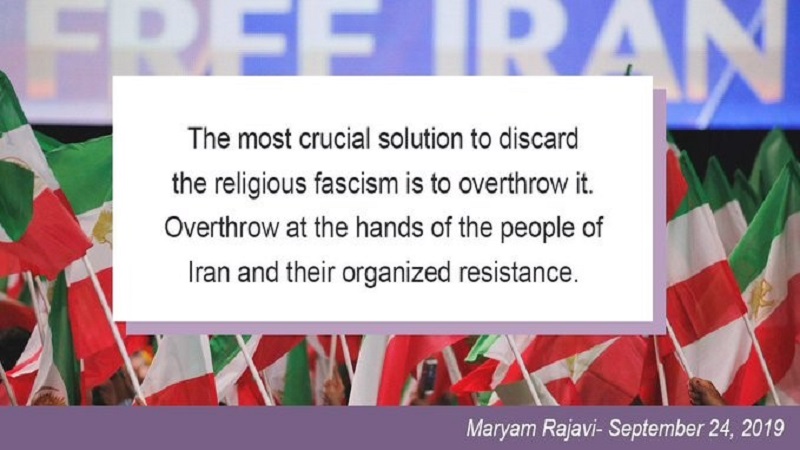 Mrs. Maryam Rajavi the president-elect of the National Council of Resistance of Iran sends a message to the demonstration by Iranian Americans

Mrs. Rajavi emphasized that the Iranian regime is Incapable of reform or change of behavior. This regime is neither capable of reform nor can it change its behavior; It will never abandon weapons of mass destruction, human rights violations, and promotion of fundamentalism and terrorism and, it will get emboldened as a result of appeasement, and it only understands the language of firmness and strength. There is a direct correlation between the regime’s crisis of being overthrown on the one hand and its terrorism and warmongering, said Mrs. Rajavi.

• “The UN Security Council must declare the clerical regime a threat to global peace and security. And, the dossier of the regime’s human rights violations, particularly the massacre of 30,000 political prisoners in 1988, must be referred to an international tribunal.”

• “Ousting the clerical regime from the rest of the region and expelling the IRGC and proxy militias from Iraq, Syria, Yemen, Lebanon, and Afghanistan is an urgent imperative.”

• “We urge all countries to join the international front against the religious fascism.”

• “The international community must recognize the right of the Iranian people’s Resistance to overthrow religious fascism and achieve freedom.”