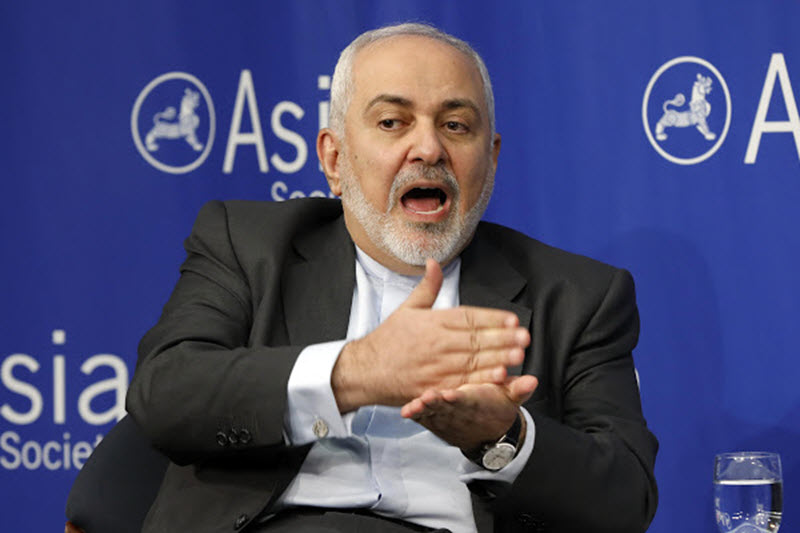 Iran regime’s Foreign Minister Mohammad Javad Zarif has yet again tried to portray the false notion that the Iranian Regime is a moderate one when he appeared on CBS’s Face the Nation last weekend.

He argued that the US’s recent designation of Iran’s Islamic Revolutionary Guard Corps (IRGC) as a terror group would tell the Iranian people that the US is not a “worthy” negotiating partner and said that Trump’s maximum pressure campaign was “squeezing the Iranian people, not the government”.

He said: “When the Iranian people are pressured, they do not respond with submission, they respond with resistance. They want us to represent them.”

All of this bluster shows that the Iranian Regime is scared.

While it is true that the Iranian people respond with resistance when pressured, the pressure is being doled out by the mullahs not the US and the Iranian people know that. That’s why a popular chant during their 16-month uprising has been “Our enemy is here, they lie when they say it’s the US.”

The Iranian Regime has lost a lot of money since the US withdrew from the nuclear deal last year and reimposed sanctions, but the Iranian people never saw any of that money anyway. The Regime squandered it on ballistic missiles, terrorist groups, and regional warmongering.

That’s why 33% of Iranians live below the poverty line, according to the Regime’s Chamber of Commerce and the rich-poor divide is only widening. (Outside experts believe the situation to be much worse.) That’s why protests sprung up in across 160 cities from December 2017, which led to at least 50 deaths of protesters at the hands of the suppressive security forces and at least 8,000 arrests. The Iranian people loudly called for the end of the Regime with the chant: “Khamenei, shame on you, leave the country alone.”

The Iranian people from all occupations, locations, and classes took to the streets to protest the Regime, with many going on strike and refusing to work. The Regime threatened to execute protesters and striking workers.

When protests sprung up over a severe drought in summer 2018 that meant Iranians had no drinking water, the Iranian Regime turned down outside help in favour of making their citizens drink dirty water. When the floods hit Iran in March, hundreds were killed, but again the Regime rejected outside help.

U.S. goal is to put pressure on the Regime so that they come back to the table for a deal that addresses all of their malign behaviours. The Regime will neither do that, help their people.