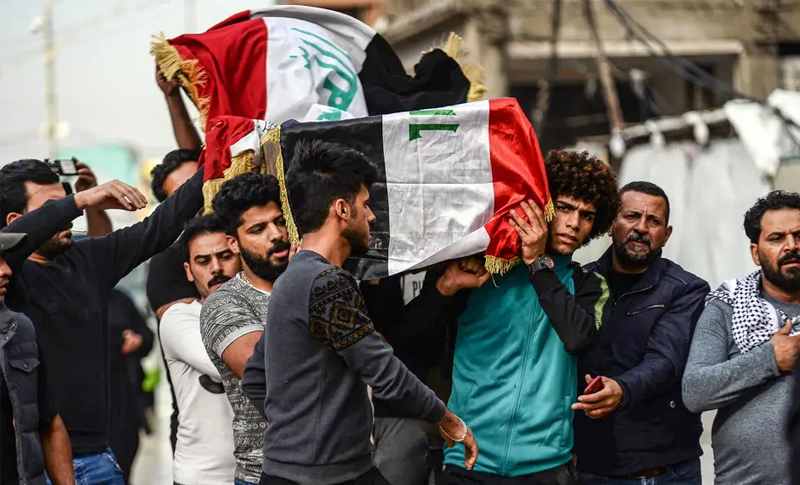 Anti-corruption demonstrations in Iraq have taken on a new dimension since January 19, with the Iraqi people, particularly those who live in the southern provinces, setting fire to posters of Iran-linked terrorist masterminds Qassem Soleimani and Abu Mahdi al-Muhandis, who died in a US drone strike on January 3.

In Najaf, protesters actually set fire to the headquarters of Iran-backed militia group Kata’ib Hezbollah, who like Soleimani and Muhandis committed numerous crimes in Iraq. While protesters in Hellah and Nasiriya blocked the main roads and those in Baghdad resisted attacks by repressive security forces.

The protesters who stormed the streets in October last year gave the government until January 18 to meet their demands, but the government failed to respond, so the people and the youth conducted a campaign of civil disobedience. In some areas, protesters were able to take control and forced security forces to retreat.

In several areas, they clashed with security forces, which left several protesters injured or even dead. Still, the protests continued, with the leaders of the uprising saying they would not support a prime ministerial candidate linked to governmental corruption.

Of course, the resurgence of the protests is devastating for the Iranian regime, who is trying to maintain a quasi-state for itself in Iraq; something that will fail if protesters manage to uproot corruption.

Iran tried to divert the protests toward the US, by making America launch missiles against Iran-linked militias in Iraq. The regime had ordered its proxies to fire on US bases in order to get a retaliation. But the Iraqi people weren’t fooled.  When the US drone strike killed those two terrorists, the Iraqi people rejoiced. They knew that the real enemy is Iran, not America.

The organizers of the nationwide Iraqi protests said: “The Iranian regime is cancer!”

The regime also planned to exhaust and intimidate the protesters by offering hollow promises, wasting time, and killing protesters. However, the protests made it clear that they will not tire. The protesters’ persistence is working; every day their numbers are growing.

They have also inspired and been inspired by protests in Lebanon and Iran, where they are also calling for the end of the Iranian Regime in their countries.

Resistance leader Massoud Rajavi said recently: “The people of the region have willed to overthrow the religious dictatorship and its agents and mercenaries. The chains will break. And history will bow before the victorious will of our peoples.”