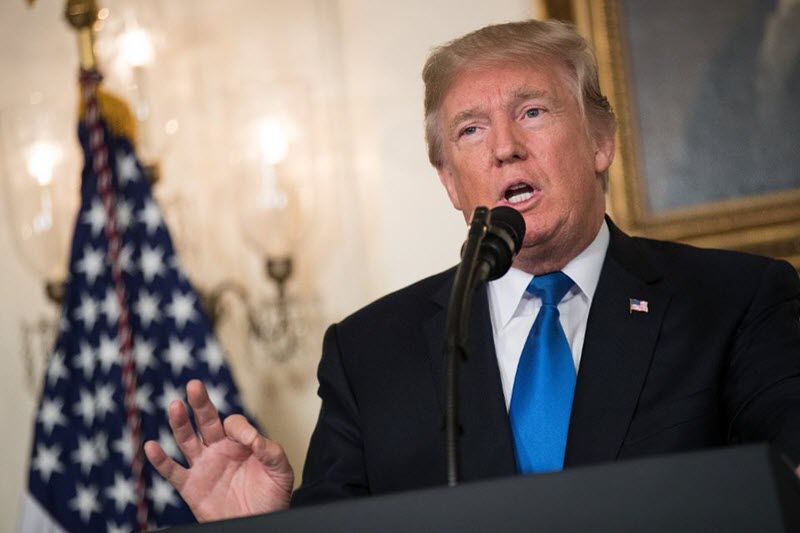 After describing it as the “worst deal ever” and threatening to scrap the entire accord, U.S. President Donald Trump has decertified the Iran nuclear deal, describing it as against U.S. national security interests, and outlined significant measures targeting the regime in its entirety. Trump took a major step in ordering the Treasury Department to fully sanction Iran’s notorious Revolutionary Guards (IRGC), describing the entity as Iranian Supreme Leader Ali Khamenei’s “corrupt terror personal terror force and militia.”

Heshmat Alavi wrote on the Forbes on October 13, 2017 and the article continues as follows:

This is a major U.S. policy shift vis-a-vis Iran dating back to the early 1950s since Eisenhower turned against the democratically elected government of Prime Minister Dr. Mohammad Mossadegh.
The U.S. Treasury Department followed suit by designating the IRGC “pursuant to the global terrorism Executive Order (E.O.) 13224 and consistent with the Countering America’s Adversaries Through Sanctions Act.” Such a move against the Guards will have major implications in Iran and the region.

In an expression of his deep disregard of the Iran nuclear deal Trump said, “In the event we are not able to reach a solution working with Congress and our allies in regards to Iran, then the agreement will be terminated.”

While always harsh on Trump, the Weekly Standard provided good reasoning for his recent decision.

“It is unassailably obvious that the Iranian regime has not complied with the agreement. The Iranians have not given international inspectors unfettered access to nuclear and military facilities, as the agreement requires. They have attempted to acquire banned nuclear and missile technology. They have exceeded the agreement’s limits on advanced centrifuges and heavy-water production. They continue, moreover, to sponsor terrorism around the world and abet the brutalities of Bashar al-Assad’s regime in Syria.”

The U.S. House of Representatives’ Foreign Affairs Committee approved a new law imposing more sanctions on Iran for its Intercontinental Ballistic Missile Program on Thursday. A legislation, set to come under consideration in the House, will require Tehran to accept harsh new conditions on the JCPOA or face a “tidal wave of sanctions.”

The Iranian opposition National Council of Resistance of Iran (NCRI), the first to blow the whistle on Iran’s nuclear program back in 2002, welcomed Trump’s decision.

NCRI President Maryam Rajavi said previous “U.S. administrations’ policies of turning a blind eye on flagrant human rights violations in Iran, the regime’s deadly meddling in the region and concessions made to it in the course of the JCPOA have been disastrous, and for which the people of Iran and region have paid heavily,” according to a statement.

Voices opposing Trump’s decision, however, argued Iran continued to abide by the JCPOA.

“The Trump administration is right that Iranian behavior destabilizes the region, but wrong when it says that such behavior contradicts the ‘spirit’ of the agreement,” former U.S. diplomat Wendy Sherman argued in a recent New York Times piece.

The JCPOA text itself begs to differ.

“Iran tried to obtain illicit technology that could be used for military nuclear and ballistic missile programs, raising questions about a possible violation of the 2015 agreement intended to stop Tehran’s drive to become an atomic armed power…”