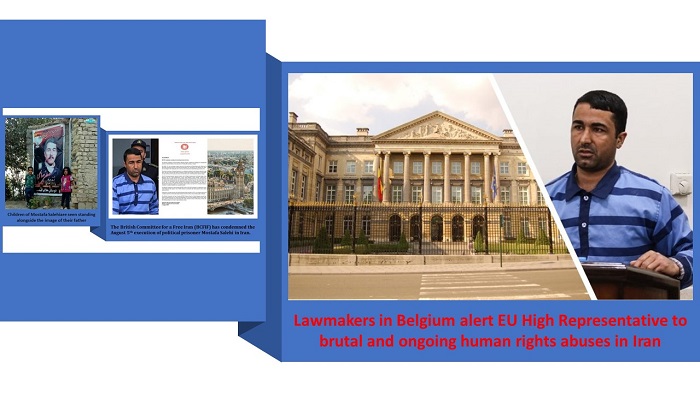 In a letter to the European Union’s High Representative for Foreign Affairs Josep Borrell, several lawmakers from Belgium expressed their concern about the human rights situation in Iran and in particular the execution of Mostafa Salehi on Wednesday 5th August.

Mr. Mostafa Salehi was arrested by the Iranian regime during the 2018 protests that spread the whole way across Iran. Mr. Salehi, 30 years old, was arrested in Kahrizsang, Isfahan, and was subjected to a sham trial and was then sentenced to death. His charge was “leading the Kahrizsang riots in Najafabad”.

In their letter to the EU High Representative for Foreign Affairs, the Belgian lawmakers described the human rights situation in Iran as being “in a very sad condition”. They mentioned the 1988 massacre in which tens of thousands of political prisoners Most of them were members and supporters of the People’s Mojahedin Organization of Iran (PMOI/MEK) executed, highlighting that the regime has still not been held accountable.

With regards to the Iranian government’s hanging of Mr. Salehi, they said that it is further proof that authorities in the country “are seeking revenge rather than justice”. They strongly condemned the execution, emphasizing that Amnesty International has also condemned the regime’s actions.

1) Amnesty International condemns the execution of protester Mostafa Salehi, which was carried out in Esfahan prison on 5 August despite serious unfair trial concerns incl torture & other ill-treatment & the denial of access to a lawyer during the investigation phase of his case. pic.twitter.com/Fh981Hlzm0

The lawmakers said that they would like to draw the High Representative’s attention to the human rights violations that have been going on for years and continue to this day. They wrote: “We are gravely concerned over the ill-treatment and torture of those who have been arrested joining the anti-regime protests and the death sentences issued upon them.”

The Belgian lawmakers encouraged Mr. Borrell to condemn the Iranian regime’s actions in the strongest terms possible, reminding him that “silence and inaction” do not work with the Iranian regime. They said that silence and action are interpreted by the mullahs as a signal to continue with their human rights abuses because they will not be held accountable.

They said that the people of Iran should not face death sentences for taking part in protests and they called for the “immediate and unconditional release” of such individuals that have been detained. The lawmakers also called for an immediate halt to the execution of political prisoners.

The Iranian regime has been basking in impunity for many years and the silence of the international community has been deafening. Firstly, the regime needs to be held accountable for its crimes in the past to send a message that no violations will be accepted. And most importantly, action needs to be taken now, especially by the Western countries that are founded on values that give their citizens the most fundamental of rights.