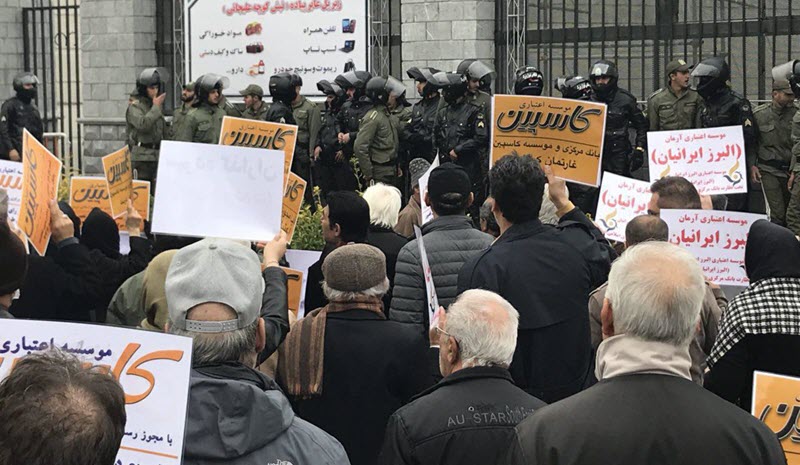 Hundreds of thousands of Iranians have had their money “looted” by financial and credit institutions that are affiliated with the Revolutionary Guards and other Regime institutions.

These people, angry at having their money swindled, have taken to the streets across Iran in cities like Tehran, Rasht, and Mashhad, among others, to protest the economic corruption in Iran’s banking system. But what started as a guild movement, soon developed into political movement when it became clear that Regime officials were not being held to account for their involvement.

According to a report by the state-owned ISNA news agency in 2017, there were over 7,000 credit institutes in operation and 6,000 of them were operating without the correct licenses, so this was clearly a widespread problem, but why were they not being investigated by the Regime’s judiciary? After all, the Regime classifies taking a deposit from somebody and refusing to return it as robbery or treachery in lending or both, but no one has been prosecuted.

The answer is that the majority of these credit institutions are run by those with ties to the Regime, possibly relatives of officials, retired officials, or even high-ranking officials still in power. According to the state-run Khabar Online website, the Revolutionary Guard and Basij are the biggest culprits.

Now, this is not a new crisis, but that doesn’t make it okay for the current rulers in the Regime to shift the blame and claim that because the institutions were set up under someone else’s watch, it’s not their problem. These financial institutes are causing massive problems to the Iranian economy, which is already on the brink of collapse, by refusing to give the impoverished people back their deposits.

The plundered people began by protesting against the institutions, but the lack of help offered by Regime officials means that the people are turning their anger toward the Regime, with more and more depositors joining the cause by the day.

This spurred other Iranians with different issues to come out into the streets and rail against the mullahs’ dictatorship, with the economic crisis being one of the driving causes of the nationwide anti-regime uprising that began in December 2017.

In order to try to contain all protests, the Regime sent in its suppression security forces, but those have failed to shut down the legitimate cries of the Iranian people who are calling for regime change, which they see as the solution to their varied problems.

The Iranian Resistance wrote: “The people of Iran, who have been oppressed and suppressed for 40 years, and deprived of their basic rights and freedoms, present themselves in the organized movements of economic and trade problems as an excuse to begin their protests… It is a new factor that has further driven a rift between the Iranian regime and its public and non-public affiliated organs on the one hand and the people of Iran on the other. And this is what has provoked fear in the Iranian government.”