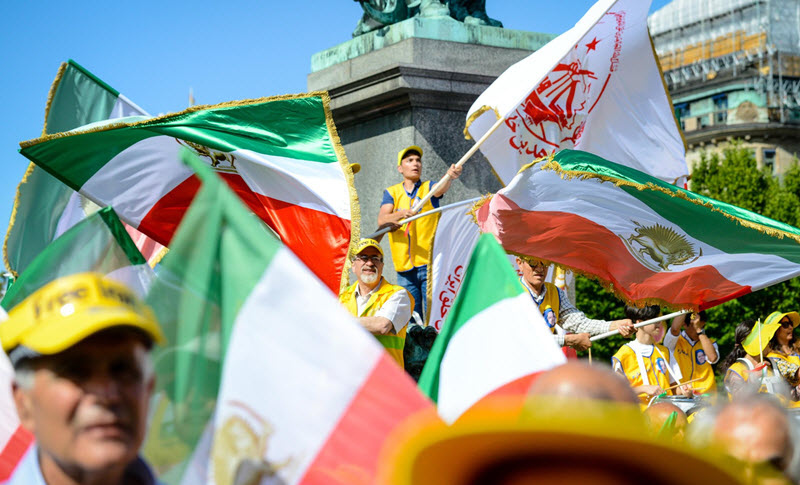 On Saturday 20th July, thousands of Iranians participated in a major demonstration in Stockholm calling for comprehensive sanctions and a firm policy against the clerical regime in Iran. They also called for the notorious Islamic Revolutionary Guard Corps (IRGC) and the Ministry of Intelligence (MOIS) to be listed as terrorist organisations and to be treated accordingly.

But most significantly, they called for the international community to recognise the Iranian people and their wishes for a future Iran.

The participants, supporters of the main democratic Iranian opposition group People’s Mojahedin Organization of Iran, also known as the Mujahedin-e Khalq or MEK, affirmed their full support for the Mojahedin and for Mrs. Maryam Rajavi, the President-elect of the National Council of Resistance of Iran (NCRI). They called on European governments to support the Resistance and Mrs. Rajavi’s ten-point plan for a future Iran.

The ten-point plan is based on democracy, equality, freedom, peace, the respect of human rights, a market economy and a non-nuclear Iran. These have been denied to the people of Iran for so many years and the people inside Iran have made it clear during recent demonstrations and protests that they fully support Mrs. Rajavi. They have also made it very clear to the regime that they are determined to see it collapse.

The speakers voiced their support for the Resistance movement and emphasised that the people of Iran shun the regime and the terror it is spreading across the region. They also called on EU governments to stop appeasing the Iranian regime and to treat it firmly. Many encouraged sanctions and against negotiating with the regime that will never change its behaviour.

All of the speakers agreed that the regime is coming to the end of its days but said that it is still imperative for appeasement to end immediately. Senator Lucio Malan questioned the European appeasement towards Iran, pointing out that the regime’s entire four-decade history is marred.

Many of the speakers also highlighted that the people of Iran are not the only winners when the regime eventually falls – global peace and security will have more potential.