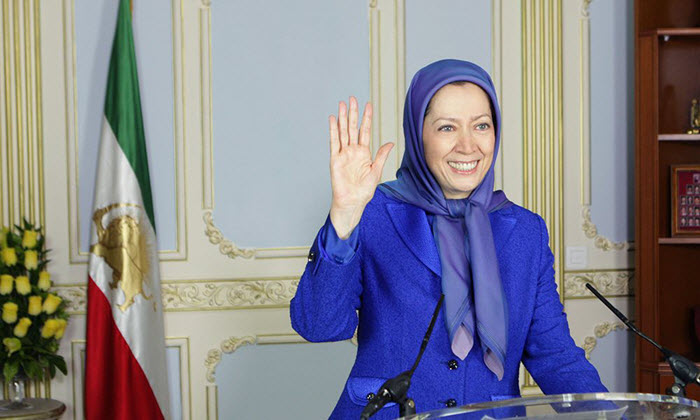 President-elect of the National Council of Resistance of Iran (NCRI), Mrs Maryam Rajavi, addressed the people who participated in the rally in New York in protest against Hassan Rouhani’s visit to the country.

She said that their demonstration against admission to the UN of the President of the religious dictatorship in Iran is a “cause of pride of the Iranian nation that expresses her protest loud and clear despite the massive reign of repression and executions prevailing the country”.

Rajavi pointed out that for as long as the U.S. keeps letting the leaders of a murderous regime enter their country, and for as long as the United Nations keeps allowing them to attend the General Assembly, they are supporting the “central banker of terrorism”.

She said: “Today, the movement to obtain justice for the victims of the 1988 massacre is spreading. The highest officials of the regime have publicly defended the carnage. Rouhani’s Justice Minister declared that he was proud of the massacre. Such admissions which constitute irrefutable evidence of their complicity in crime against humanity, double the United Nations responsibility in prosecuting the leaders of the clerical regime.”

Mrs Rajavi emphasised that Rouhani does not represent the Iranian people. He is their “most vicious enemy” and his presidency has involved “killings, devastation, and plunder of Iran’s national wealth and resources”.

More precisely, she lists some of the human rights violations and crimes against humanity that Rouhani and the regime have been involved with:

• Huge increase in the number of executions of political prisoners

• Warmongering in the region

She also said that the methods above are used by the regime as a way of countering the threat they face from “deep-seated and acute social discontent and an organized resistance movement”.

“We emphasize that any party that is truly seeking to contain war, terrorism and instability in the Middle East, it must evict the Iranian regime from the entire region as the first step. The emergence of Daesh was the outcome of suppression of the peoples of Iraq and Syria by the clerical regime and its puppets. There will be no conceivable end to the crises in the region without driving out the IRGC from Syria, Iraq, Yemen and Lebanon.”

Mrs. Rajavi said that appeasing the regime is hurting the world. She called on all governments and the United Nations to end this policy and stand with the people of Iran. This can be done by conditioning relations with the regime and obliging the release of political prisoners.

“I urge the international community, particularly the UN Security Council and the UN General Assembly to investigate the crimes of the Iranian regime, particularly the massacre in 1988, and bring to justice the perpetrators of this great crime against humanity. This is the most serious yardstick of respect for human rights in contemporary history.”