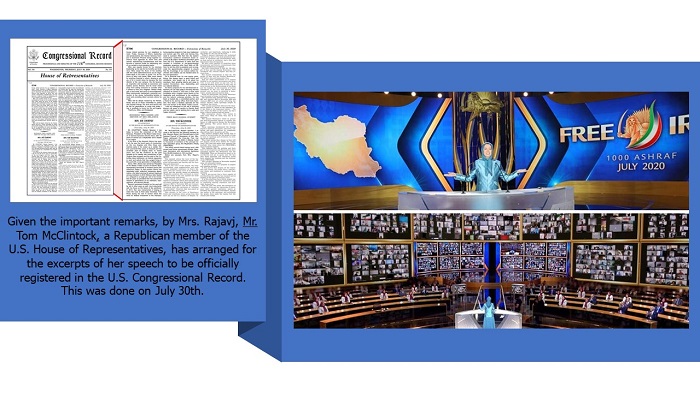 The President-elect of the National Council of Resistance (NCRI), Mrs. Maryam Rajavi’s speech to the Free Iran Global Summit, held online from the NCRI’s base at Ashraf-3 in Albania on July 17th this year has been recognized by the U.S. Congress.

Due to coronavirus pandemic protocols, this year’s annual gathering was held online. Over 30,000 locations across the globe joined the Free Iran Global Summit. The Summit was hosted by the National Council of Resistance of Iran (NCRI) and, the People’s Mujahedin of Iran (PMOI / MEK Iran), at the MEK’s compound in Albania.

We pledged to overthrow the regime, take back #Iran and restore all the violated and plundered rights of the people of Iran. #FreeIran2020 pic.twitter.com/UsK55PTA4n

In this gathering, more than 1,000 dignitaries from 102 countries participated, many of whom spoke in solidarity with the MEK, the main opposition, and Maryam Rajavi, the President-elect of the National Council of Iran (NCRI), and the Iranian people’s quest for freedom and democracy.

The keynote speaker at this gathering was Mrs. Maryam Rajavi, whose speech was interrupted many times by the crowd chanting and showing their empathy and encouragement of her devotion to a free Iran, the people’s vote, and plans that guarantee a democratic future for Iran.

She said, “We have come together to underline three monumental and historic commitments that we have pledged to accomplish:

Our first commitment is that we, the people of Iran and the Iranian Resistance, will overthrow the clerical regime and will reclaim Iran.

Our second commitment is that we, the people of Iran and the Iranian Resistance, will build a free and democratic Iran.

And our third commitment is to remain faithful to our people’s sovereignty and their vote; to not seek power at any cost, but to establish freedom and justice at any cost; to never return to the dictatorships of the Shah and the mullahs. And, as the majority of elected lawmakers in the U.S. and Europe have pointed out, we want to establish a democratic, secular, and non-nuclear Iran.”

The #FreeIran2020 Global Summit at Ashraf 3 was the voice of the largest organized resistance in #Iran’s history, with the roaring river of its martyrs’ blood, echoing the calls for the clerical regime’s overthrow during successive uprisings from December 2017 to January 2020. pic.twitter.com/FJpQcrVF77

Given the important remarks, by Mrs. Rajavj, Mr. Tom McClintock, a Republican member of the U.S. House of Representatives, has arranged for the excerpts of her speech to be officially registered in the U.S. Congressional Record. This was done on July 30th after the summit had ended.

To see the full text, see the following links: