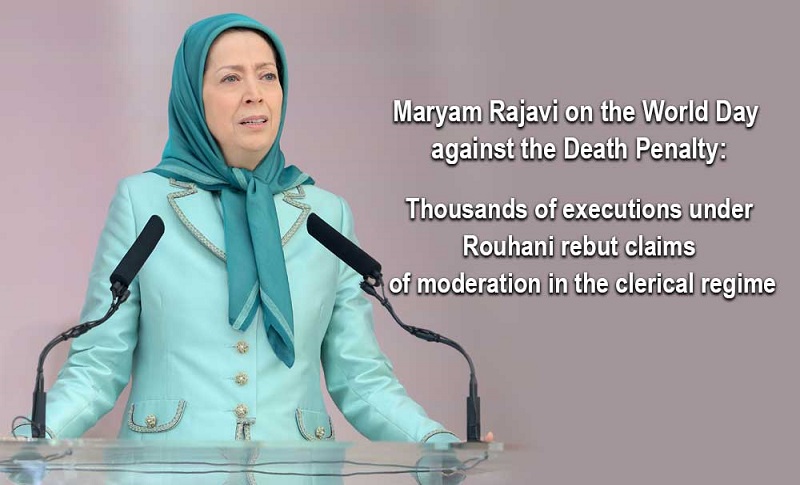 On the occasion of the World Day against the Death Penalty, Mrs. Maryam Rajavi, President-elect of the National Council of Resistance of Iran (NCRI) – the main opposition to the Iranian regime, spoke about the horrific human rights record in Iran, particularly under regime’s so-called “Moderate” president, Hassan Rouhani. She also mentioned the regime’s motivations for executing so many people and she saluted the many freedom-seekers that were killed at the hands of the regime.

The Iranian regime is trying its hardest to control society that is simmering with discontent and dissent. It is imprisoning and executing political prisoners as a way of trying to silence the opposition. It is a strategy that is not working because, if anything, it is making the people of Iran even more resolute in their demands for regime change.

Mrs. Rajavi explains that the vile treatment of political prisoners by the regime makes it absolutely essential for international human rights organizations and especially the United Nations to officially investigate prison conditions.

Iran has the highest execution per capita in the world and it is very clear that this is not going to change under the rule of the mullahs. In fact, it will probably continue to rise as the regime becomes increasingly desperate because of international and domestic pressure.

Over the past four decades, a constant cycle of executions, suppression, and terror has served two purposes – to preserve the regime’s rule through an atmosphere of terror, and also to train the regime’s mercenaries in the most ruthless way possible.

The 1988 massacre was the most bloody event in the regime’s history, and indeed one of the most atrocious crimes against humanity in recent decades. More than 30,000 political prisoners, mostly members and supporters of the People’s Mojahedin Organization of Iran (PMOI, Mujahedin-e Khalq or MEK) were executed during the course of one single summer and the regime is still basking in impunity.

Since then, the regime has continued to go against international norms and regulations, including executing young people who were minors at the time of their alleged crime.

Iranian President Hassan Rouhani has been considered a moderate. This is something that has guaranteed the regime a certain and how can the Western world, and the rest of the international community, remain so silent when faced with so many acts of belligerence. Not only does the regime terrorize the people of Iran, but it is also terrorising millions of more people across the region through its deadly and bloody interventions, most notably in Syria, Iraq, and Yemen. It has even tried to export its terror to Europe, with a number of plots being foiled during the course of 2018.

The NCRI is determined to establish a republic that is based on the principle of human rights, equality, freedom, separation of state and religion and democracy. There will be no place for the abuse of human rights and executions.