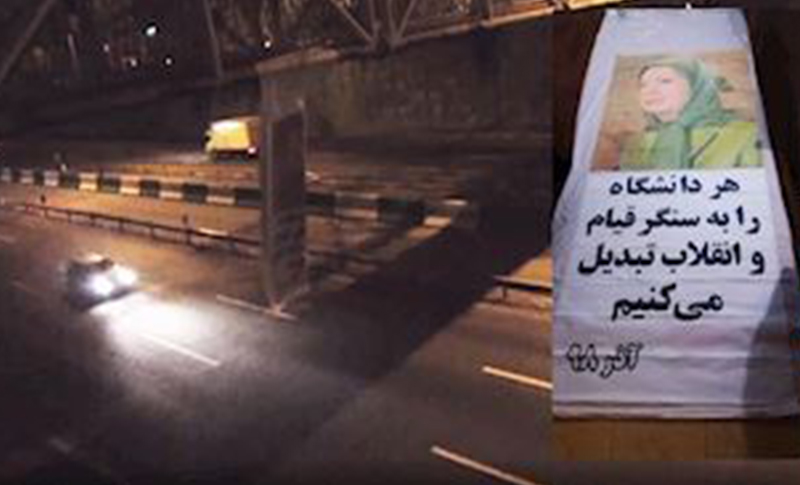 Members of the Resistance Units inside Iran, which are directly associated with the Iranian opposition People’s Mojahedin Organization of Iran (PMOI/MEK), are still risking their lives to conduct pro-resistance activities against the mullahs’ regime in December.

Throughout the country, many cities are becoming scenes of Resistance with members putting up posters of Iranian Resistance leader Massoud Rajavi and opposition President Maryam Rajavi, head of the National Council of Resistance of Iran (NCRI), with quotes of the leaders being plastered up alongside.

These are dangerous activities for the Resistance Units and MEK supporters because the regime is in the midst of a major crackdown on the mullahs’ regime, with at least 1,000 protesters killed, 4,000 injured, and 12,000 arrested. These numbers are rising by the day.

“Amir Hossein Ghazizadeh Hashemi, member of the Iranian regime’s Majlis (parliament), confirmed the brutal slaughter of the citizens of Mahshahr during the protests.”#Iran#IranProtestshttps://t.co/sgwN7xn7NU

In Abadan, a Massoud Rajavi poster reads: “The overthrow of the inhumane enemy is definite.”

In Tehran, various signs were put up quoting Massoud and Maryam Rajavi, urging the United Nations Security Council to hold senior regime officials accountable for the crackdown on the Iranian people. While in Lahijan and Rasht, the posters quoted the leaders as calling for continued protests to overthrow the mullahs’ regime.

In Rasht, Zahedan, Tabriz, and Sari, resistance unit members encouraged the Iranian people to continue their protests, saying that the only path to freedom is to weaken the mullahs before their eventual collapse.

It’s important to know that any support of the MEK in Iran is punishable by death because the regime is so scared of the power of the MEK to overthrow the regime.

According to Amnesty International, MEK supporter Gholamreza Khosravi Savadjani was executed in June 2014 just for sending a small financial donation to the MEK’s satellite TV network, Sima-ye Azadi (Voice of Freedom). He was arrested in 2008 in Rafsanjan.