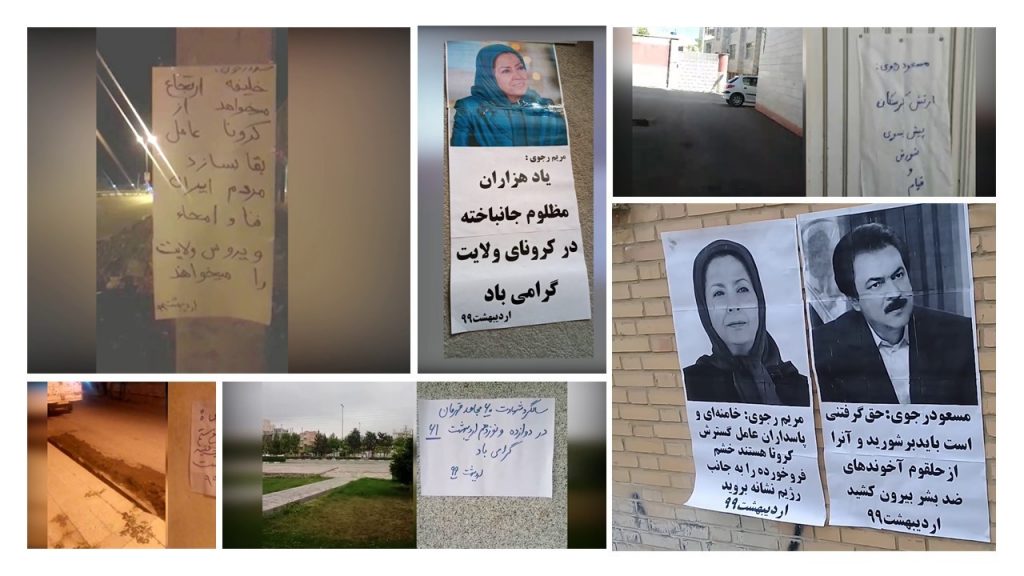 In recent days, supporters of the MEK Iran, including many young people, and numerous citizens have chanted slogans that recalled Maryam Rajavi, president-elect of the National Council of Resistance of Iran (NCRI), and Massoud Rajavi, leader of the Iranian Resistance to intervene.

The news website of MEK Iran informs that the demonstrations took place in many cities of Iran: Tehran Mashhad, Semnan, Hamedan, Shahrekord, Fuman, Qazvin, Khorramabad, Andimeshk, Gotham, Shiraz, Robat Karim, Bander Abbas, Ahvaz, Golan, Nowshahr, Masjed Soleyman, Karaj, Shahsarar, Rasht, Dezful, Amol, Esfarayen, and Isfahan. The protesters aim to gain support in the fight against the mullahs while pushing for assistance to those infected with the coronavirus. The number of the members increasing so much, day after day, that numerous anti-regime and pro-Resistance writings have appeared on the walls of shops and houses, on the windshields of cars, and on the sidewalks.

Among the most mentioned slogans, MEK Iran points out some of the messages were statements of Maryam Rajavi, who wrote, “We must overthrow the tyrannical rule that plunders the public good and represses people”; “The mullahs don’t care about Iran. Iran and the Iranians do not want the mullahs”; “The mullahs are bearers of despair and dismay, we must face all this”; “Long live those who rebel for freedom”; “Long live the protesters for freedom. The Iranian people will fight and prevail over both the coronavirus and the mullahs.”

According to the MEK Iran, other slogans in place are attributed to Massoud Rajavi were “The supreme head of the regime wants to use the coronavirus epidemic, there is an opportunity to preserve his dominion; but the Iranian people want the annihilation and destruction of both the virus and the tyrannical rule of the mullahs” as well as “We must fight with a hundred times more force and make Iran free of the mullahs.” He also stated, “The army of those who are hungry for freedom continues the struggle and revolt”, “The centers of the repressive Basij and Pasdaran (IRGC) must be demolished”, and “Down with Khamenei, long live Rajavi.” Rajavi urged that “The religious dictatorship is the main cause of the high number of coronavirus victims”; “Lives that are lost will shorten the duration of the regime” and “It is time to rise again, rebel, break the chains and free the prisoners.”

Secretariat of the National Council of the Iranian Resistance (NCRI)