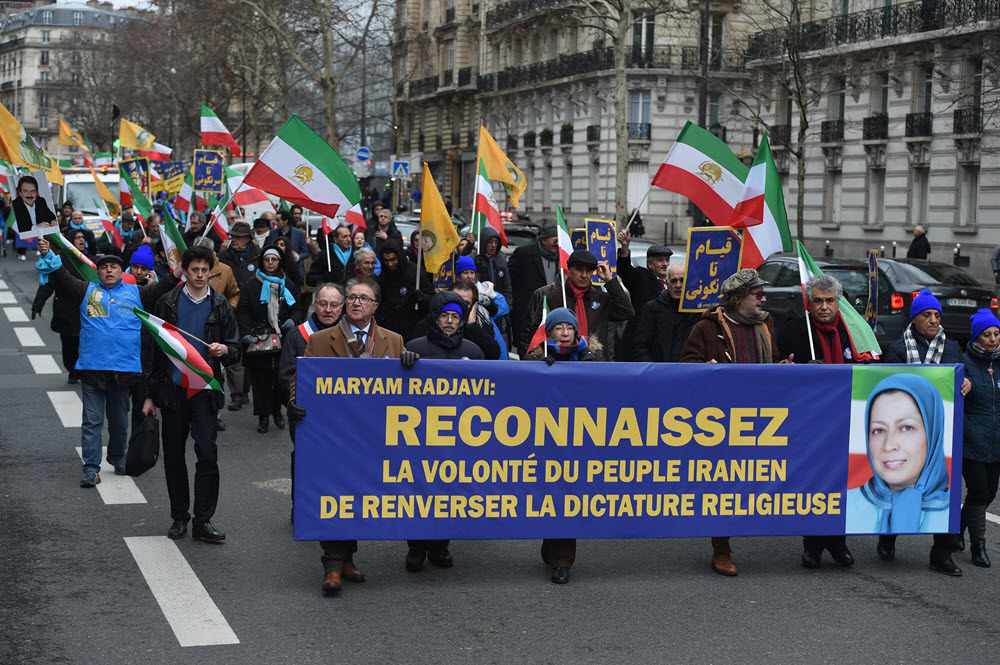 Thousands of Iranians and their supporters gathered in Paris over the weekend to mark the 40th anniversary of the anti-monarchical revolution.

The protesters marched across the French capital, chanting anti-regime slogans and asking the international community to take action against the atrocities committed by clerical regime in Iran. The protesters specifically condemned Europe for not taking the same tough stance on Iran that the US has.

Former French Senator Jean-Pierre Michel, one of the speakers at the event, said that he wasn’t a fan of Donald Trump, but that the US was “right” about Iran, before launching into a scathing attack of Europe’s leaders for their appeasement tactics towards Iran and their attempts to ignore the Iranian Resistance.

He said: “I want to call upon our governments, European governments, Jean-Yves Le Drian and Federica Mogherini… open your eyes and ears. Retake the dignity that the status of Europe brings upon you, take back the dignity of the Europeans. Support the Iranian Resistance.”

Another speaker, former Spanish Member of the European Parliament Dr Alejo Vidal-Quadras, called on the EU to end its appeasement policies and take a hard line towards the Iranian Regime, which has “no future”, and supports the Iranian opposition instead.

He said: “Appeasement only encourages the mullahs to commit more crimes in Iran and more terrorism in Europe. The EU has to put the entire Iranian Intelligence Ministry and the Islamic Revolutionary Guard Corps on its terrorism blacklist.”

The march, largely organised by exiled Iranian opposition group the Mujahedeen-e-Khalq (MEK), began in Denfert Rochereau Square and finished in front of the French National Assembly at Les Invalides. Protesters specifically condemned the Iranian Regime for human rights violations, terrorist plots, and their missile and nuclear programs, while supporting the Iranian people’s uprising against the mullahs’ dictatorship.

Gilbert Mitterrand, another speaker at the event, reiterated that Amnesty International called 2018 Iran’s year of shame for its brutal crackdown on peaceful protesters, which led to the arrest of least 7,000 people.

Security at the rally was tight, with many fearing that the MEK gathering would be the subject of another bomb plot by Iran. In June 2018, European authorities uncovered a plot to bomb a MEK rally attended by over 100,000 people, which an Iranian diplomat helped to plan.

MEK spokesman Shahin Gobadi said: “As long as we’re dealing with the main state sponsor of terrorism, there is a concern … But that will never stop us.”