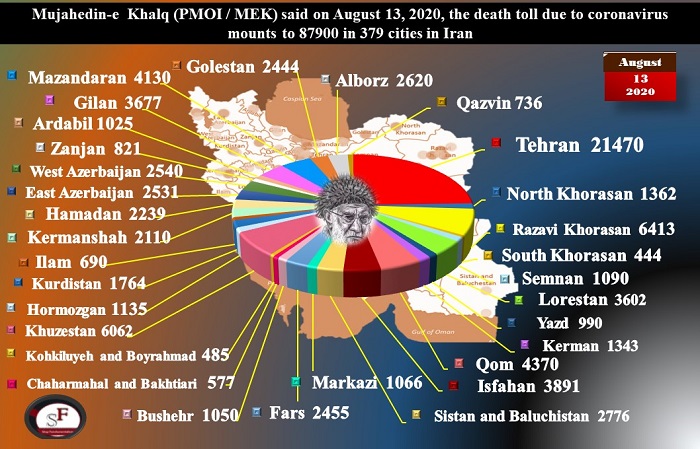 In the provinces, the most recent deaths told reported were:

The People’s Mojahedin Organization of Iran (PMOI/#MEK) announced on August 13, 2020, that the #Coronavirus death toll in 379 cities across #Iran had passed 87,900.
Governor of #Tehran: Tehran is still red. https://t.co/c2rC3vFKvh

Sadly, this is just a minimum because the regime has been intimidating relatives and medical staff into reporting deaths as another cause in order to make themselves look better. The regime claims that just 18,800 people have died of coronavirus.

More than 87,900 people have died of the novel #coronavirus in 379 cities checkered across all of Iran’s 31 provinces, according to the Iranian opposition PMOI/MEK.

Deputy Health Minister Iraj Harirchi admitted Tuesday: “You can’t deny the fact that in some cases we can’t say everything in public and this is due to the country’s economic characteristics.”

Medical staff in Iran are concerned that the country hasn’t yet contained the first coronavirus wave and that they will face a second in the autumn that hits at the same time as the flu season, putting intense pressure on the medical system.

Alireza Naji, head of the Virus Detection Research Centre, said Tuesday: “We must see how successful countries that are very much like us were able to overcome this, to realize what we have to do. There is a fixed example across the globe and successful countries, and we need to use those measures.”

While Alireza Zali, head of the Tehran Covid-19 Task Force, said that until the crisis is controlled, the regime cannot reopen schools and the like, without placing more people in danger, especially because schools lack basic facilities like toilets.

He said: “Six months have passed since the Covid-19 epidemic began and the number of medical specialists and nurses were less than what is needed in normal circumstances. Even if there was no coronavirus, our medical teams were already working under extreme pressure. After Covid-19, this workload has increased extensively. A large number of our colleagues have not received their paychecks for months now and many lack the necessary motivation due to their low wages.”

Meanwhile, the virus is spreading inside Iranian prisons, placing thousands of inmates in danger.

Maryam Rajavi, head of the National Council of Resistance of Iran (NCRI), said that the regime cannot protect inmates and called for the United Nations to take urgent action to stop the ongoing catastrophe and force the mullahs to, at least temporarily, release prisoners until the end of this pandemic.

#Iran Regime’s Ongoing Disinformation Over #Covid_19.
A former member of the #Iranian Health Ministry’s #coronavirus task force declared that the official estimates of infection and mortality rates account for only about five percent of the true total.https://t.co/nbxbYRLP4e