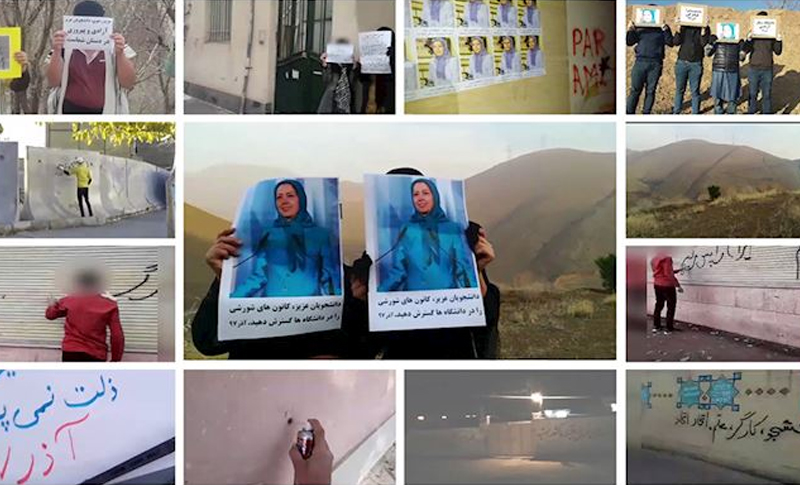 Iranian Resistance unit members and supporters of the People’s Mojahedin Organization of Iran (PMOI/MEK) across Iran have been risking their lives to continue their anti-Iranian regime activities, despite the increased presence of the mullahs’ security forces.

Now, dozens of areas across Iran are becoming scenes of resistance, with posters of Iranian opposition leaders Massoud and Maryam Rajavi being plastered up and having quotes written on them.

In Tehran, resistance unit members put up a poster of Maryam Rajavi, with the quote “the ground is shaking under the mullahs”, while another reads “Iran has risen against the mullahs’ regime”. One in Tehran’s Narges Park reads, “Supporting rebellious youth and resistance units is a national duty. Each alley and street should be transformed into a bastion of uprising and revolution”.

In Tehran’s Taleghani Avenue, there is a poster of Massoud Rajavi with the quote, “it is time to expand the number of rebellious centers and alleys in cities across the country”, which is calling for more anti-regime activities.

There are several other posters and quotes of Maryam and Massoud Rajavi up in the Iranian capital right now, but there are plenty more in other cities.

In Kashan, a Massoud Rajavi poster read: “The overthrow of the inhumane regime is certain.”

In Mashhad, another poster of him read: “The mullahs have no choice but resorting to further oppression. However, they’re digging their own grave.”

This comes during the Iran uprising, when the MEK has confirmed that over 1,500 protesters have been killed, with 504 named so far by the MEK. Over 4,000 have been injured and at least 12,000 arrested, with all numbers set to rise over the coming days and weeks.

With the release of 16 new names, a total of 520 names of martyrs of the nationwide uprising have been announced. Call on the UN to appoint a fact-finding mission to visit those arrested #Iranhttps://t.co/VUyO4rG4AJ pic.twitter.com/qq5LXlp01f

In Iran, any support for the MEK is punishable by death under the mullahs’ regime. In June 2014, MEK supporter Gholamreza Khosravi Savadjani was executed, according to Amnesty International, for merely sending a small financial donation to satellite TV network Sima-ye Azadi which broadcasts Iranian resistance’s activities.