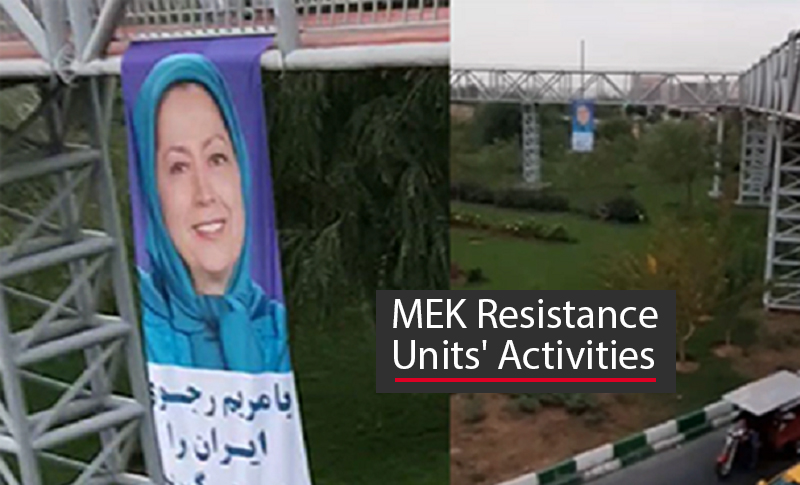 Supporters of the People’s Mojahedin Organization of Iran (PMOI/MEK) inside Iran, who are members of the Resistance Units have continued their defiance of the regime against all odds during December, spreading the message of resistance against the regime.

They’ve been putting up posters of resistance leaders Massoud and Maryam Rajavi, alongside quotes about how the regime will soon fall. These people are risking their lives, because the mullahs’ regime is currently in the midst of a crackdown on all resistance efforts, with MEK sources confirming that at least 1,000 have died, 4,000 injured, and 12,000 arrested, with those numbers only rising.

In Isfahan, they put up posters of Massoud Rajavi with the message “This regime understands no language but force and firmness” and of Maryam Rajavi with the quote “Hail to the Iranian people’s uprising for freedom”.

In Tehran, a Massoud Rajavi poster has the message “We will take back Iran from the mullahs’ claws”, while a poster of him in Tabriz has the quote “The Iranian people and their resistance are paying a heavy price for a significant leap forward in their struggle”.

In Bojnurd, a Massoud Rajavi poster has the message, “More flames are awaiting this regime and the uprising fire for freedom continues”, while a Maryam Rajavi poster reads, “Iran will be free through an uprising and resistance units”.

In Karaj, a city that saw massive protests in the November uprising, resistance unit members put images of opposition leaders reading, “Death to Khamenei! Hail to Rajavi! This is a revolution that will continue until our complete victory.”

The uprising in November proved that the people of #Iran are prepared and yearning to do away with the mullahs’ religious fascist rule #IranProtests #StopIranBloodshed pic.twitter.com/AbpAIgbAgx

Support for the MEK carries the death penalty in Iran. Amnesty International says that in 2014, MEK supporter Gholamreza Khosravi Savadjani was arrested and executed for the ‘crime’ of sending a small financial donation to the MEK’s satellite TV network Sima-ye Azadi (Voice of Freedom)”.