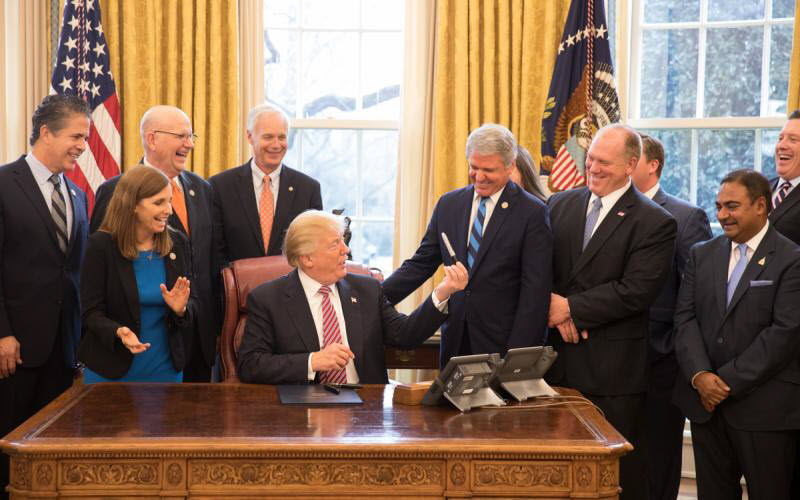 On Thurday, Representative Michael McCaul (Texas), a Republican on the House Foreign Affairs Committee, spoke at The Heritage Foundation and explained to Kurdistan 24 his support for President Donald Trump’s tough position on Iran.
McCaul had previously chaired the House Committee on Homeland Security.

Regarding relations between the White House and Congress on the issue, McCaul replied, “Very good.” He confirmed the White House sees Iran, “particularly, as of late, as a specific threat.” According to USA Today’s reporting, McCaul said that human intelligence provided the information that prompted the US military deployments to the Persian Gulf. He alleged that the head of the Quds Force of the Islamic Revolutionary Guard Corps (IRGC), Qasim Soleimani, told Iran’s militia proxies in Iraq, as well as Lebanese Hezbollah, to be prepared for a confrontation with the US.

Then, on Sunday, a rocket was fired into Baghdad’s Green Zone, which is home to Iraqi government offices, as well as foreign diplomatic missions — including the US embassy.

In response, US President Trump tweeted this response: “If Iran wants to fight, that will be the official end of Iran.”

A State Department spokesman later confirmed, “A low-grade rocket did land within the International Zone near the U.S. Embassy,” and added, “attacks on U.S. personnel and facilities will not be tolerated and will be responded to in a decisive manner.”

McCaul, like Trump, took a tough line on Iran. “Any country that attacks our military forces will be met with a swift and deadly response.”

Iran faces many difficulties as a result of US sanctions. “They’re starting to cripple Iran,” McCaul said, and this “looks like an act of desperation to me.”

According to McCaul, Al Qaeda “had a lot of scientists who worked at Mosul University,” and they provided the technical expertise for AQAP’s terrorism. This was the first time a US official claimed that Iraqis were involved with the terrorist organization. Previously, AQAP had been seen as dominated by Yemenis and Saudis.

McCaul speculated that the Sahel—the semi-arid belt crossing Africa from the Red Sea to the Atlantic Ocean that divides the Sahara Desert from the more fertile region to the south—appears to be the next theater of conflict. He said that while the Islamic State is “going underground in Iraq and Syria,” it is appearing elsewhere, “particularly in the Sahel.” He continued, “If you talk to the Defense Department, they’ll tell you that this is going to be the next hot spot.”

The Foreign Minister Alpha Barry, of Burkina Faso, one of the Sahel countries, addressed the UN Security Council. He called for the creation of an international counterterrorism coalition to fight the growing violence. Barry blamed the Sahel’s increasing instability on the chaotic situation in Libya.

“Libya is still a breeding ground of terrorists and criminals of all stripes, and is thus the main destabilizing element in our region,” Barry said.