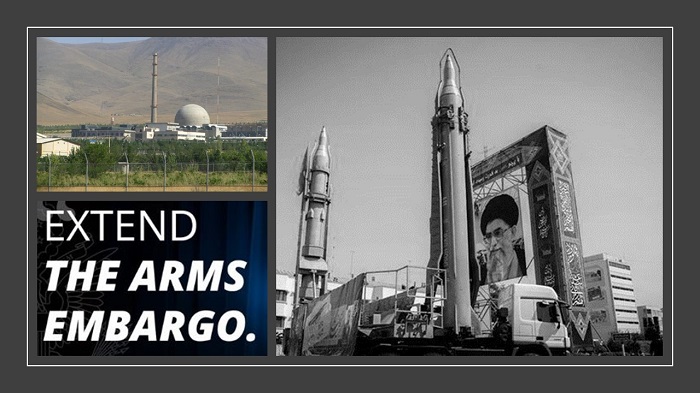 Iran’s economic problems are not caused by sanctions but by the widespread corruption of the mullahs. Over the past 40 years, the regime has stolen hundreds of billions of dollars from the Iranian people, sending tens of millions into poverty in Iran, but still, President Hassan Rouhani claimed last month that sanctions were the problem, even saying that they prevented Iran from buying medicine despite humanitarian exemptions.

The Iranian opposition to the mullahs’ regime National Council of Resistance of Iran (#NCRI), and (#PMOI / #MEK has reported gross human rights violations due to poverty in #Iran.#FreeIran2020 pic.twitter.com/iFrooEqdw5

Mrs. Maryam Rajavi the President-elect of the National Council of Resistance of Iran’s (NCRI): Today, not only the freedom of the people of Iran but their very lives and health, and the country’s economy and existence depends on the overthrow of the clerical regime.

Of course, this was instantly rebuked by many, including a politician from the rival faction in Iran’s parliament who said that all problems can be traced back to Rouhani. This doesn’t show that the regime is ready for change. Far from it. The rival factions in the regime are like shoes, subtly different but walking towards the same goal.

However, a more important admonishment of Rouhani’s claims comes from the Iranian people who have repeatedly made clear over the past three years that they see all of their problems, including the economy, as stemming from the regime. Their protests have constantly labeled the regime as the reason why they have trouble accessing basic goods and have called for more sanctions on the regime so the mullahs have less money to spend on domestic repression and international terrorism.

The Rt. Hon David Jones MP said #UK #France #Germany is mistaken in their adherence to the flawed nuclear deal that does not hold the regime to account. The regime to continue its domestic crackdown and export terrorism https://t.co/Uy5scy41aH #MEK #Iran pic.twitter.com/qFRarjVSfF

Even the state-run media has reported on a fraction of the Iranian officials’ plundering. In 2018, ILNA news agency reported on $30 billion going missing from the banking network in just 10 months, while in 2019 vice-president Eshagh Jahangiri and the Aftab-e Yazd daily estimated that $18-22 billion had been lost in the cheap currency provided for imports that never came.

Earlier this year, as the regime asked the World Bank for a $5 billion loan, regime economist Hossain Raghfar suggested that perhaps with $20 billion missings and no one held accountably, this money would not be well spent.

WATCH | Alireza Jafarzadeh (@A_Jafarzadeh), the NCRI-US Deputy Dir, speaks at the rally held by the DC-area Iranians "to support the restoration of all #UNSC sanctions & call for recognition of the Iranian ppl's struggle for a #FreeIran," on Sept 22, 2020.https://t.co/XQZTLv0zI5

Regime insiders are the ones given favorable exchange rates and making off with the money. They should be held to account, but they aren’t. And the true amount may be worse. The Iranian resistance predicts that $50-60 billion may have gone missing since 2017; money that could well have prevented the starvation of millions of Iranians by creating jobs, like nurses, doctors, cleaners, delivery drivers, and more that would have been important during a pandemic.

#Iranian American Communities supporters of The #PMOI #MEK #Iran, in the US, rally in front of WhiteHouse, Sept 22, 2020, to support the US’s call on the UN to SnapBack all sanctions on dictators ruling Iran and said EU must follow. pic.twitter.com/MGiuF73T8o

The National Council of Resistance of Iran (NCRI) wrote: “As a result, the sanctions against this regime, which plunders the property of the people and cuts off the hands of the deprived people for stealing a piece of bread, must continue. This criminal regime would use every dollar they get against the Iranian people to preserve its survival.”

In response to this catastrophic situation, Iranian people have no other option but to resist a decent and better life. The People’s Mojahedin Organization of Iran, (PMOI / MEK) and their network inside Iran, MEK resistance units are mobilizing people to restore their rights.

Today, not only the freedom of the people of #Iran, but their very lives and health, &the country’s economy and existence depends on the overthrow of the clerical regime. Likewise, global &regional peace and security & confronting natural disasters depend on regime change in Iran pic.twitter.com/dGU8o3ZB7k