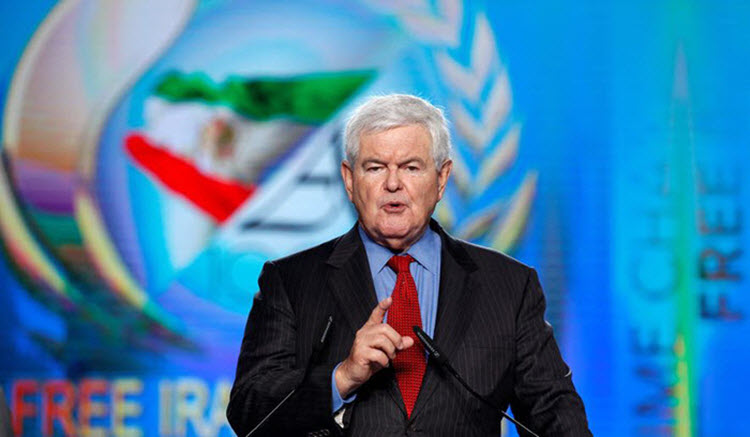 Newt Gingrich, a Republican and former speaker of the House of Representatives and former U.S. representative of Georgia’s 6th Congressional District, spoke at the Free Iran rally in Paris on 9th July. The Washington Times published an article in which his remarks were summarised.

He said that the nature of the Iranian dictatorship is a key issue in the current American election campaign. The nuclear deal made with Iran was “insane”, he said. Firstly, there are no moderates in Iran. Secondly, the dictatorship cannot be trusted. He said that giving money to the “leading state sponsor of terrorism makes no sense”.

He said that the Iranian regime has “outmanoeuvred the diplomats of the United States and European countries” – they rejected the UN and the dictatorship confirmed that they will sign anything, but give it no meaning. They just wanted the money and will have agreed to anything to get it.

He said to the audience: “We have an obligation with your help to communicate one key fact — with support, with encouragement, with a systematic effort: The people of Iran will rise against the dictatorship, and we will eliminate the dictatorship as a threat to civilization.”

Gingrich reassured the supporters that they are a vital part of the process in overthrowing the Iranian regime. He said that the gathering of these delegations that come from all around the world and by highlighting the importance to the media, each and every participant is making a difference. He said that they are all part of history and “with your continued commitment you are winning the argument”.

He said: “I want you to know that the message I will take home to America is that there are thousands and thousands of Iranians who are prepared, who are ready, who are committed and who believe that we can truly bring democracy to Iran.”