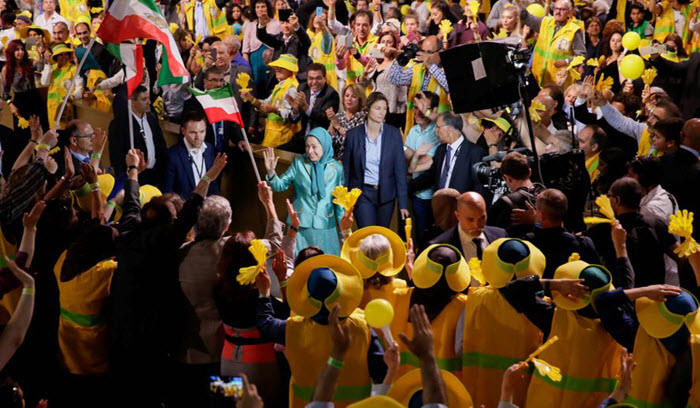 The National Council of Resistance of Iran (NCRI) has written an article about the paranoia the Iranian regime is experiencing following the 9th July “Free Iran” rally in Paris where over 100,000 people from around the world gathered to show their support.

In the past the regime failed to take the Resistance seriously, positing that the People’s Mojahedin Organization of Iran, PMOI (MEK) “has no major standing among Iranians and poses no serious threat”.

“This argument intended to convince its interlocutors that the only realistic policy options are either appeasing Tehran or waging a full-fledged external war. And given the tragic experiences of recent history in the Middle East, Iran’s mullahs remain confident that appeasement looks like the more attractive option.”

Before the 9th July rally scores of political prisoners risked torture and their lives to send messages of support to the Resistance and urging people to voice their desire for change. Many young people who had fled Iran also attended the rally. The NCRI said: “Their presence spoke on behalf of the new generation and families of political prisoners.  This prevented the mullahs from once again denying the deep roots of the resistance in Iran.” There were also hundreds of political figures from all over the world who attended and participated. For example, former U.S. House of Representatives Speaker Newt Gingrich, former Governor and Democratic Party chairman Howard Dean, former President of the European Commission Jose Manual Barroso, former Foreign Minister of Canada John Baird and Prince Turki al-Faisal of Saudi Arabia.

The regime became “hysterical”, highlighted the NCRI, because “nothing makes the mullahs more afraid than witnessing the countries in the region and their opposition to be on the same side”. The event showed that the conflict is “between the Iranian regime and the peoples of Iran and the region”.

The regime could not ignore the event. They reacted immediately after the event – top officials of the regime attacked the NCRI and the President-elect of the Iranian Resistance, Maryam Rajavi. The officials came from both factions of the regime – those associated with Supreme Leader Ali Khamenei and the allies of “moderate” President Hassan Rouhani. The NCRI list them as follows:

Mohsen Rezai, the former IRGC Commander in Chief and Secretary of the Expediency Council

Ali Younesi, special advisor to the regime’s President Rouhani, and the former Minister of Intelligence

Amir Abdollahain, Deputy Foreign Minister for the Middle East until recently, when he was appointed as a special advisor to Ali Larijani, the Speaker of the Parliament

As well as lashing out at the Saudis, they “summoned the French Ambassador in Tehran to register an official protest and summoned the diplomat in charge of Egypt’s interest section in Tehran to protest the presence of an official delegation from the Egyptian Parliament, headed by the Vice-President of the Parliament, at the Free Iran gathering”. Their hysterical reaction went on for 10 days. The NCRI said: “As of July 24, there had been over 4000 stories in the news outfits and web sites affiliated with the Iranian regime regarding the July 9 gathering.”

In their article, the NCRI noted the following reactions from the Iranian regime:

Ali Larijani, Speaker of Majlis (Parliament), Fars news agency (affiliated with the IRGC): “Another example is allowing the terrorist-killer Monafeghin (MEK) in Paris and the nonsense that was uttered by the moron Saudi official. The gathering and what was raised was so worthless and so impolite that it does not merit a response.”

Eshag Jahangiri, First Vice President, IRNA, July 13, 2016: “These countries think they are doing something big against Iran. They are trying to tell the Iranian people that they are aligning themselves with the Monafeghin (Tehran’s derogatory term for the PMOI).  They should know that PMOI are unpopular in Iran, people hate them… Some upstart countries in the region think they can oppose the Iranian regime by aligning themselves with the PMOI.”

Ali Akbar Velayati, former Foreign Minister, current foreign policy advisor to Supreme Leader Ali Khamenei, Mashregh News, (affiliated with the Revolutionary Guards), July 13, 2016: “This (PMOI) is a politically bankrupt organization and they have betrayed their own people since the inception of the group… This group does not possess the courage to come to Iran and talk to the Iranian people directly; their claims are for beyond Iran’s borders.”

Mohsen Rezai, Secretary of the Expediency Council, former commander of the IRGC, Mehr News Agency (Affiliated with the Ministry of Intelligence), July 17, 2016:  “Turki al-Faisal said in this gathering that with the help of you (PMOI), the Islamic Republic of Iran will be overthrown in the near future. This is nothing but madness and lunacy.”

Javad Zarif Foreign Minister, Mehr News Agency, July 13, 2016: “The presence of individuals such as Turki-al Faisal in this gathering is indicative of the incompetency and naiveté of these individuals… Individuals such as John Bolton and Newt Gingrich have been attending these gatherings in the past few years. This is nothing new. This has always been their policy.”

Sadeq Larijani, head of the Judiciary, Mehr News Agency, July 11, 2016, referring to the (PMOI’s) support in the US and some European countries: “…The French allow them to hold such a meeting and the Americans also take part in these gatherings.”

IRGC Brigadier General Ramezan Sharif, head of public relations of the IRGC, Tasnim News Agency (affiliated with the IRGC Quds Force), July 10, 2016: “The presence of the former head of intelligence of the Saudi Royal family in the gathering of the PMOI in Paris and his expression of sympathy and empathy with them indicated a long-time bond between terrorist PMOI and the Saudi regime against the Islamic Republic.”

Mehr News Agency, July 12, 2016: “Following the gathering of the Monafeghin (PMOI) group in Paris, Abolghsem Delfi, Director of the Western European Affairs of the Foreign Ministry, summoned the French Ambassador in Tehran to the foreign ministry and registered the strong protest of the Islamic Republic against the gathering.”

Javad Jamali, member of the National Security Committee of the Majlis (Parliament), Mehr News Agency, July 13, 2016: “In today’s session, the statement of the National Security Committee against the gathering of the Monafeghin (PMOI), which was attended by one of the senior officials of Saudi Arabia, was prepared. In this statement the Committee condemned the PMOI gathering in Paris and urged the Foreign Ministry to take a firm and strong position and actions.”

Amir Abdollahian, special advisor to Ali Larijani, the Speaker of the Parliament, July 10, 2016: “Saudi Arabia is trying to keep us occupied with our internal issues so we have less influence and less presence in Syria. Saudi Arabia is very much scared of the Revolutionary Guards and their presence in Syria. Because the Revolutionary Guards have been able to guard Syria against other terrorist groups of the region. I predict that Saudi Arabia will increase its military support to the Mojahedin. They want to use the Mojahedin’s international network to pressure Iran on its role in Yemen and Syria.”

Khordad Website, affiliated with the “moderates”, in a July 13, 2016 article entitled “Obama’s letters to Iran were burnt in Paris”: “Just 6 months prior to Obama’s leaving office, and on the verge of the Mojahedin’s Paris meeting that was attended by U.S. and Arab past and present authorities, the policy of regime change in Iran is gaining popularity. This is a fake hope and illusion.”

Tabnak News agency, affiliated with Mohsen Rezai, the Secretary of the Exigency Council, July 13, 2016:  “Although France’s ambassador was called in to Iran’s Foreign Ministry and many Iranian officials reacted to Saudi Arabia’s support for the PMOI, and despite the fact that this meeting has been looked at from Iran’s relations with both France and Saudi Arabia, all speeches and the language of the speeches are indicative of the fact that this meeting and its content was planned not in Riyadh or Europe, but in Washington.”

Dowlat Bahar Newspaper (affiliated with former President Mahmoud Ahmadinejad), July 10, 2016: “This year’s MEK meeting had major differences from the previous ones. The presence of Arab delegates affiliated with Saudi Arabia was a highlight. Turki al-Faisal, the former head of Saudi intelligence and Soleiman Wahdan, Deputy Speaker of the Egyptian Parliament and head of a delegation of Egyptian officials participated in the meeting. Representatives from Algeria (former Prime Minister Ahmed Ghazali) and Jordan (former Culture Minister Saleh al-qallab), Morocco, Bahrain (parliamentary committee), Kuwait, Lebanon, Yemen, Tunisia, the United Arab Emirates attended the meeting. In addition, Adrianus Melkert of the Dutch Labor Party and the former head of the UN special envoy for Iraq, former Foreign Minister Giulio Terzi of Italy were also present in the meeting.”

Tasnim news agency (affiliated with the IRGC Quds Force), July 16, 2016: “The most significant difference of this year compared to the previous years was the identity of the guests and the participants. For the first time this year, almost all of the regime’s opponents and adversaries had gathered under one roof to review effective ways to confront Tehran.”

Vatan-e Emrouz newspaper, wrote on July 11, 2016 that this year’s meeting “possessed one significant difference with the previous meetings of this group. This group that has been removed from the terrorist groups of both Europe and U.S. had managed to have a significant presence from Saudi Arabia and other Arab countries in its meeting. Aside from the special representation of Saudi Arabia, the presence of delegations from the US, EU and some Arab countries was noticeable. There were also politicians from India and Africa in the meeting… Newt Gingrich, the former Speaker of the House of Representatives, who is very close to Donald Trump was also present in this meeting.”

Velayat Bahar (News and analysis web site), July 11, 2016: “This meeting took place in Paris with the presence of a wide range of Iranian counter-revolutionaries.”