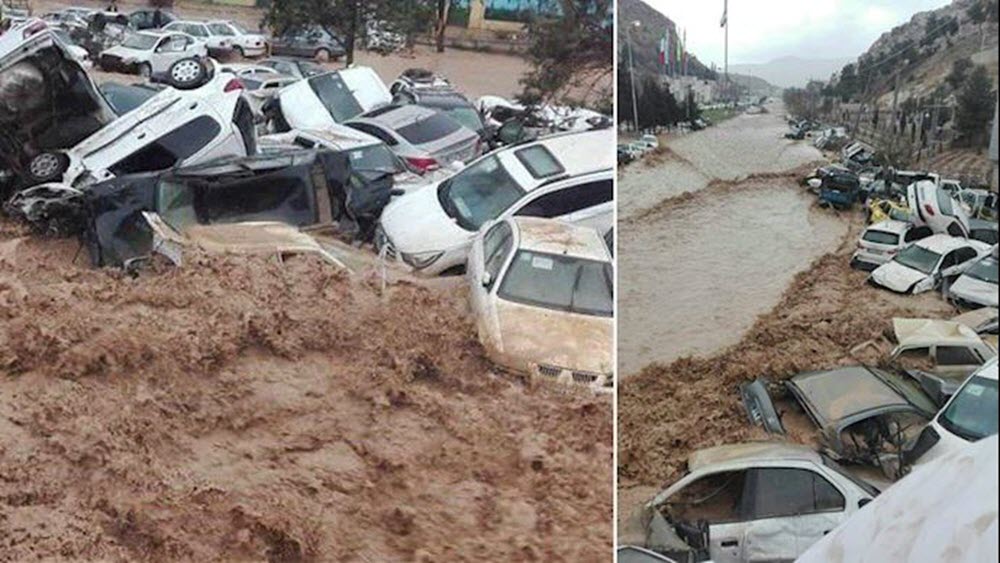 On Sunday, March 17th, rain began to pour across the northern cities of Iran. Cities and villages in provinces such as Golestan, Mazandaran, Northern Khorasan and Semnan flooded, as the consequences of the Iranian regime’s inadequate policies regarding natural disasters became apparent.

Lives and belongings were lost in the floods at the beginning of the Persian New Year. Those left homeless numbered in the tens of thousands. Financial losses are devastating in these provinces, and thousands of people are without shelter.

This disaster was, in fact, anticipated by meteorologists and discussed in the news media. Weather forecasters warned of this catastrophe. In a surprising move, the governors of these cities didn’t even visit the desperate people. However, in a display of the ordinary Iranian’s frustration with leadership, a Revolutionary Guards commander was evicted from one the the cities, after he had come to the region to take pictures of the disaster.

An examination of Iran’s budget of for the year 1398 (2019-2020), shows that much the money in the budget is used for the expenses of institutes affiliated to Revolutionary Guards, or to suppress the protests of the people who are losing their lives and properties in the recent flooding. In fact, on December 25th, the state-run Entekhab website wrote, “The share of The Joint Staff of the Islamic Revolutionary Guard Corps was 236,197 million tomans (approx. $23.6 million), which will reach up to 471,864 million tomans (approx. $47.2 million) next year [2019]. The budget of the Basij Organization has also increased for the next year. The status of the budget for delegation of Jurisprudent in IRGC has also improved in the proposed bill of the next year. This institution received 102,198.5 million tomans in the year of 2018 which has been increased to 114,139 million tomans for the next year.

Compare this amount to what ISNA News Agency reported that the Director General of the Gonbad-e-Kavos water field said five years ago, “It is predicted that 530 million rials will be allocated for the dredging operations of these rivers.” It seems a small price to pay to avoid so much damage and heartbreak.

If a percentage of these funds was used to build floodgates, dams, reservoirs, and flood canals the flooding would be far different from what we see today. For instance, in 2016, there was heavy flooding in Sistan and Baluchistan, Fars and Kerman. Five cities — Shiraz, Darab, Sardouei, Sibsouran and Iranshahr were damaged. Other floods and damages that could have been prevented with a little attention and planning have occurred recently.

Although draught is one of Iran’s top problems, both draught and flooding could be solved with some simple plans, and attention to environmental difficulties.

A huge portion of budget is allocated to clerical institutions every year. These institutions teach the Law of Shari’a. They provide the ideology for terrorism and suppression in countries across the world.

Today, the total budget for preserving the environment is 403 billion tomans. This is supposed to solve all the country’s ecological problems such as drought, air pollution, flood, forests, marshes, drought of wetlands, drying of lakes and so on.

This seems absurd, especially after the deputy director of the Environmental Protection Agency of the regime revealed that Iran has a shocking16 million tons of soil erosion each year. This is 6-8 million tons above the global average.

“Iran is on the brink of environmental catastrophe. Iran’s corrupt leaders have gravely mismanaged Iran’s water resources for 40 years, lining their pockets on useless projects instead of serving the interests of its citizens. Iranian people deserve better,” the U.S. State Department tweeted on World Water Day.

The suffering witnessed during the days of Nowruz is said to be caused by corruption, looting, and systematic plundering is the government itself, which is squandering the country’s wealth on suppressing the people or for censorship and advertising the reactionary ideology and the Revolutionary Guards.

The lives of the people of Iran are being destroyed, as it the beautiful nature of Iran. Experience from the past year shows that the solution to the environmental, social, and political crises in the country is the overthrow of the regime in its entirety.