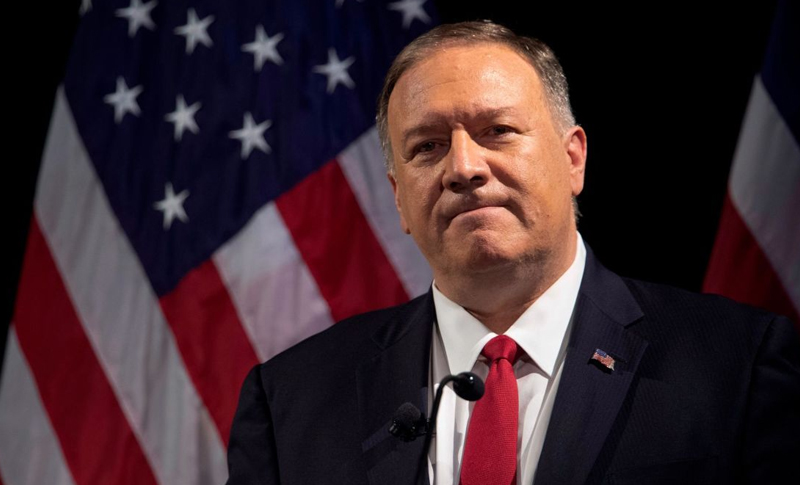 Iranian people took to the streets in mid-November to protest Iranian regime due to the rise in fuel prices. The peaceful demonstrations quickly spread to over 180 cities but was met with a brutal crackdown by Iranian security forces.

Secretary of State Mike Pompeo made his remarks during a meeting organized at the State Department addressing Iran’s record on human rights abuses.
The secretary said Thursday that Tehran stands accused of killing “hundreds and hundreds of protesters since mid-November, possibly 1,000.”
Meanwhile Pompeo announced new sanctions against Iran on Thursday.

The secretary said: “think of the thousands – you all know them – think of the thousands of Iranians executed in prison following protests in 1988, the students that were slaughtered in the protests in 1999. And then think of the protest in 2009. We all recall the cries of “Where is my vote?” Those protesters were met with more bloodshed and sentences to serve – to be served out in places like Evin Prison. It’s the same story today.

The regime has killed hundreds and hundreds of protesters since mid-November, possibly more than 1,000. The regime cut off the internet, a basic communication tool, to try and stop the world to see the horrors that were taking place inside of their country.”

“I have a message for the leaders of the regime,” Pompeo said. “If you seek to recover respect from your people and the world, if you seek stability and prosperity for a once great nation, you must respect the commitments that you’ve made, you must respect human rights.”

The US Representative of the National Council of Resistance of Iran (NCRI-US), Soona Samsami, has welcomed the unanimous passing of a resolution (H.Res.752), entitled “Supporting the rights of the people of Iran to free expression, condemning the Iranian regime for its crackdown on legitimate protests, and for other purposes”, in the Foreign Affairs Committee of the US House of Representatives.

The resolution was amended and passed shortly after the uprising, which spread to 191 cities, began.

Samsami said: “This timely bipartisan resolution sends an unequivocal and powerful message to the people of Iran that US Congress fully supports them in their nationwide uprising for a free Iran and that it strongly condemns the massacre perpetrated by the Iranian regime in November.”

The security forces murdered over 1,500 protesters, of whom 520 have been identified so far by the Iranian Resistance, on the orders of Supreme Leader Ali Khamenei. Still, the uprising shook the regime to its core and is another step closer to the mullahs’ downfall.

Samsami said: “The uprising’s gains are irreversible; no matter how deep or wide the state suppression.”

The resolution said that the security forces “used lethal force” and “killed hundreds of people” in “the popular protests against the Iranian regime”, with reports that regime authorities have “refused to return victims’ bodies to their families and that security forces have removed bodies from morgues and transferred them to unknown locations”.

Samsami added: “The NCRI’s President-elect, Mrs Maryam Rajavi, has repeatedly underscored that the slaughter of protesters in November was a manifest case of a crime against humanity and, therefore, the United Nations Security Council must take urgent action to halt the killings and suppression and secure the release of those arrested.”