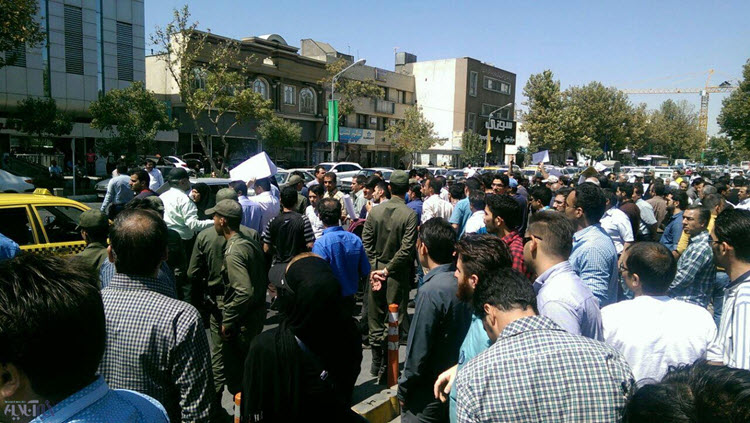 On Tuesday 1st November, Rouhani was in Parliament to defend his three new ministers. At the same time, many people from all over Iran gathered outside the buildings in protest against the Iranian regime’s plundering of the country’s already meagre assets. The National Council of Resistance of Iran (NCRI) report that hundreds of teachers from the literacy movement, “Shandiz Padideh” shareholders, workers and employees of Telecom, business owners, and so on, attended the demonstration.

Security forces tried to prevent the protesters from gathering and used repressive methods to do so. Intelligence agents, plain-clothed officers and anti-riot police started early in the morning to clear the area. Special forces were stationed in vehicles in front of the main and side doors of the mullahs’ parliament.

The NCRI say that demonstrators chanted: “Theft and corruption by the Ministry of Finance”, “This much embezzlement has turned Iran into Karbala (a killing field)”, “Rouhani’s cabinet was blind and did not see the theft”, “O’ Messiah, uproot this oppression”, “shareholders of Padideh have only heard lies”, “Khorassan prosecutor set fire to our belongings”, “Those who claim to have faith, have betrayed all the time”, “The three branches of the government do nothing but red tape and whitewashing (their crimes)”, “Today is a day of mourning, because the nation’s life is insecure” and “We will not leave until we get an answer”.

Another protester held a placard that stated: “Building the country is the greatest crime in Iran, trusting the government is definitely a mistake.”

Telecom workers has been gathered outside the parliament the two previous days too. Many brought their families even though it was quite cold. Members of the regime’s parliament gave false promises to the protesters in an attempt to persuade them to leave.

The NCRI added: “More than 700 owners of coffee shops from the provinces of Isfahan, Chaharmahal-Bakhtiari, Lorestan, etc. participated in the rally in protest to the sealing of their businesses.” Together they chanted “Heyhat Menna Zellah” to say they would not give in to the oppression of the rulers and that they will continue to demand their rights no matter what the cost.