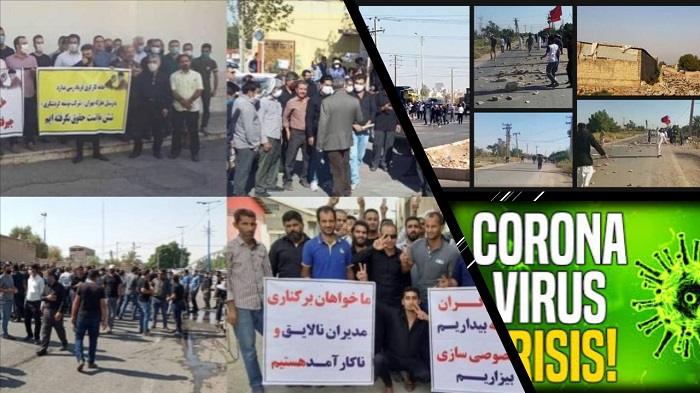 In recent days, there have been numerous protests in Iran.  News obtained by the People’s Mojahedin Organization of Iran (PMOI / MEK Iran) suggests that in spite of the COVID-19 outbreak and the way the regime has used the crisis to stop protests, people are rising up against the regime.

On Wednesday, Abolfaz Kianshahr villagers in the southwest protested because the regime’s agents were sent to destroy their homes. Tear gas was dispersed and the regime’s “so-called Bonyad Mostazafan, or Foundation of the Abased, is behind this attack and tries to confiscate people’s lands.” Mrs. Maryam Rajavi, the President-elect of the National Council of Resistance of Iran (NCRI), was quick to condemn the attack on “poor villagers” by the regime’s repressive forces.  The only offense the villagers had committed was defending their lives and homes against the mullahs.

Workers of the Haft Tappeh Sugarcane Company on Sunday, August 23, continued their protests and strike for the 70th day in Shush, Khuzestan province, southwest Iran.#IranProtests#اعتراضات_سراسری pic.twitter.com/jx8pZ7jnRW

At the same time families of the Ukrainian airliner victims who lost their lives when the regime’s Revolutionary Guards (IRGC) in January were responsible for shooting down the passenger jet in assembled outside the embassy of Ukraine requesting a meeting with the Ukrainian ambassador in Tehran. This has happened following a confession from the regime that the passengers were alive for 19 seconds until the plane was struck by a second missile.

Locals from the village of Dobb-e Hardan in Khuzestan Province on Monday held a rally protesting the “lack of drinking water and demanding water tankers be sent to their village.”

Workers of the Haft Tappeh Sugarcane Company are also on strike and are in the 73rd day of a protest rally held in front of the governorate in the city of Shush in Khuzestan province,

These are localized protests but could turn into nationwide protests.

Responses from the media to the protests

The state-run Khabaronline news agency stated “The political, economic and social situation of our country is sick. Everyone knows the [regime] faces various challenges within the next year.”

The state-run Ebtekar daily, stated: “We are grappling with different crises. From an economic crisis and super challenges to the water and environmental challenges, corruption and [government’s] inefficiency, regional crises, and crushing sanctions. These crises are all because of our inefficiency. It means that our regional strategy now faces problems, our economic strategy has failed in protecting us from sanctions [effectiveness], our governing system and running the country is costly without having the desired result and our structures are not transparent enough to prevent corruption.”

The state-run Arman daily on Thursday wrote: “The real social capital, which the public’s trust has damaged. This is the first discussion. The second discussion is what results in it will have and unfortunately, this is dangerous.”