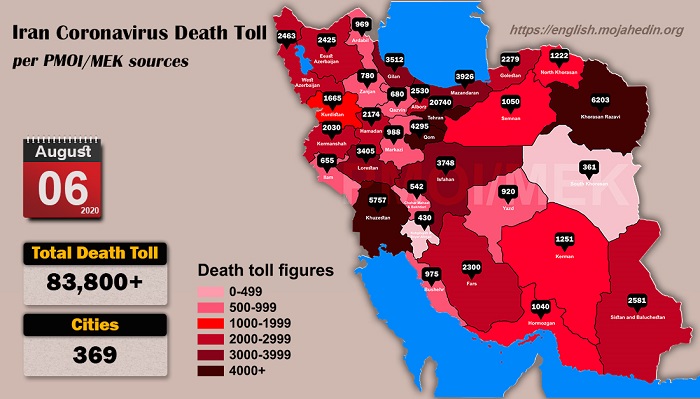 The SARS-Cov-2 virus entered Iran from China much earlier than was admitted by the Iranian regime. The virus got into Iran and spread because of the reluctance of the regime to do anything about it, even to acknowledge that it was already spreading in the community a month before it was finally reported.

Iran may have got the virus originally from China, but incompetence led to the country becoming an epicenter of its own with viruses being spread across Europe and other parts of the world from Iran.

According to a recent report by the People’s Mojahedin Organization of Iran (PMOI /MEK Iran), over 83,800 Iranians have died from the disease and there is no sign that there has been an easing in infections. It is the MEK who has been able to unearth some of the reasons why Iran’s Covid-19 tragedy happened.

For a start, Iran’s regime did not want anything to get in the way of the sham parliamentary elections, even an announcement about the virus. Then the Iranian Revolutionary Guards owned airline, Mahan Air, was flying between China and Iran continuously for months even when the pandemic had been announced b the WHO.

Despite #Iran Regime’s Inaction, Nurses and Medical Staff Are Helping #COVID-19 Victims, Risking Their Own Lives.
The COVID-19 death toll and infection rate are rapidly rising in Iran. Among victims are hundreds of medical staff and health professionalshttps://t.co/R0Q188c5SZ

Now, there have been doubting voices emerging within the regime. Even the state-run media is running stories of critical comments being made about the response to the virus. An article in the Setareh Sobh daily wrote that “some studies show that the novel coronavirus was transmitted from China to Iran in early January, at least a month before the official announcement of the country’s officials.

And for some reason or lack of information, this issue was not announced. It was announced when nothing could have been done, and the virus had vastly spread in locations such as Tehran, Qom, Gilan, Mazandaran, etc. and many were either infected or died. In fact, a wrong policy and having no transparency in giving the information to the public from the beginning created inconsistency and confusion in the government health department.”

The article refers to the fact that the regime deliberately lifted restrictions too early and this has pushed the nation into a sweeping second wave of disease and deaths.

More than 83,200 people have died of the novel #coronavirus in 353 cities checkered across all of Iran’s 31 provinces, according to the Iranian opposition PMOI/MEK.

The report concluded by saying:

“While the Nowruz [Persian New Year] was approaching and families were sensitive about this issue, we witnessed that due to some limitations the disease was considerably controlled. But apparently, some government officials thought that the continuation of holidays could face the country with economic problems and challenges. Therefore, they rushed in lifting prohibitions and limitations, and from 11 April they started gradually lifting limitations.

This, thus, resulted in people’s optimism, and they thought the situation has returned to normal and the whole issue is over.  The government’s mismanagement reached its peak in June when travel and commuting were allowed, followed by the reopening of some universities and schools, reopening of religious sites, and some gatherings, which pushed Iran into the second phase of the disease.

Meanwhile, the United States which has the highest COVID-19 death toll has not entered the second phase of the disease, and many European countries have been able, through imposing and maintaining quarantine, to control the disease.”

“Due to the flawed structure of health decision-making and government mismanagement, Iran is and will continue to be plagued by the disease. When the [regime’s] president [Hassan Rouhani] says that Muharram mourning ceremonies could be held in a glorious way, regardless of the opinion of health experts and specialists, it means there is a serious disagreement between the government and the National Coronavirus Combating Task Force.

More than 83,800 people have died of the novel #coronavirus in 369 cities checkered across all of Iran’s 31 provinces, according to the Iranian opposition PMOI/MEK. pic.twitter.com/XL0RCmTaNg

Despite the fact, most people want to cancel the national entrance exams or to hold mourning ceremonies virtually.”