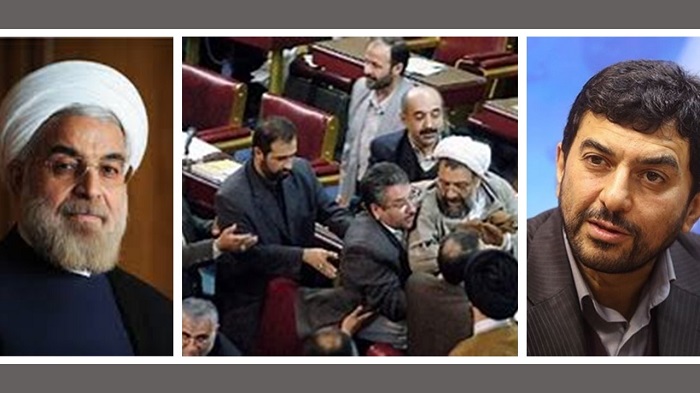 Hassan Rouhani, the mullahs’ President, decided to skip the Iranian Parliament on Wednesday 13th August on the day he was supposed to be present to support his own choice of Minister for the position of Minister of Industries, Mining, and Trade.

This ministry has become a well-known example of corruption and plundering. Rouhani’s candidate for the minister, Hossein Modarres Khiabani, was rejected by the Parliament, which means that Rouhani now needs a state order from Supreme Leader, Ali Khamenei, to continue managing the ministry on a caretaker basis.

Confusion and division have dominated the Majlis sessions. Rouhani has refused to attend the latest sitting of the Majlis, but it has also been reported that decisions on the college entrance exams and the response to Coivid-19 have been major contributors to the chaos on the floor of Parliament. There has also been a call by an MP for the Health Minister, Saed Namaki, to be impeached.

Where did Hassan Rouhani come from? IranWire looks at Rouhani’s past and tests a recent claim of his destitute background.https://t.co/yNAw3VLYJ4

The member, Hossein Shojaie Ali Abadi, asked “why is the National Covid-19 Task Force banning Rouhani’s presence here but a million or so gathering for college entrance exams is permitted? I am demanding impeachment measures against the Health and Science ministers, not for their decision or indecision regarding college entrance exams, but for them playing with the people’s trust, with the credibility of the National Covid-19 Task Force. When people themselves say we can’t abide by the health protocols, what has suddenly happened in the past 24 hours that authorities are giving a green light for college entrance exams.”

Another unhappy MP, Alireza Salimi, said that it was established practice and Majlis rules that the President should be present when a Minister candidate is present. “This (Rouhani’s absence) is a clear violation of Majlis regulations and an insult to this body because he is not present here,” said Salimi.

An MP from sari, Hamid Reza Haji, speculated that “those people previously in the Ministry of Industries, Mining, and Trade who carried out measures in favor of the vehicle and steel industries, while taking advantage of the steel industry retirees, they are behind the recent measures these days.”

Other MPs questioned why Mr. Khiabani (Rouhani’s chosen candidate) had been chosen at all. “Mr. Khiabani first needs to answer what happened to all the foreign currencies purchased at extremely low and discount amounts?” said an indignant Masoud Gudarzi. “What’s going on here? People are laughing at us. Mr. Rouhani, you had no other candidates? Are you ridiculing the Majlis?”

#Iran‘s parliament today rejected Hossein Modares Khiabani’s nomination for minister of trade and industries. Would note this ministry has been plagued by dysfunction. Rouhani has gone through three industries ministers during his second term alone.https://t.co/6vzskdR94Z

Another parliamentarian said that the choice of Mr. Khiabani would have led to his prosecution for corruption, not to his selection as a viable minister.

The People’s Mojahedin Organization of Iran  (PMOI / MEK) main opposition to the mullahs’ regime and it is a major threat to the regime’s existence and the MEK has been instrumental in drawing the world’s attention to the regime’s crimes and corruption.