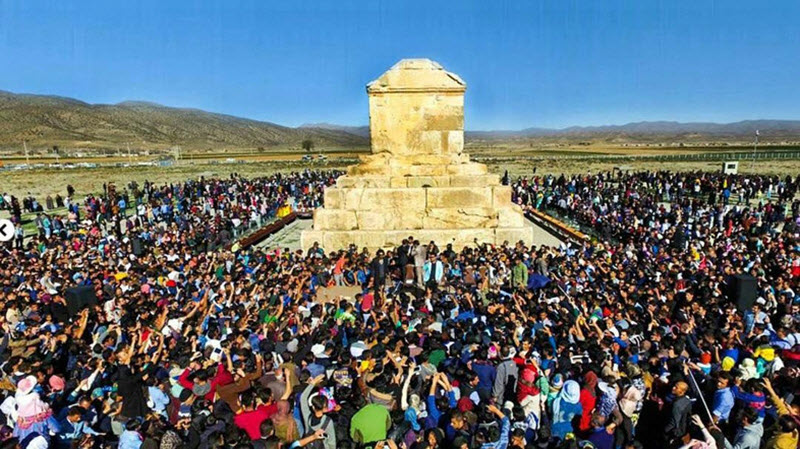 On the aftermath of protest rallies and demonstrations which occurred during the commemoration of the ‘Cyrus the Great Day’ in Iran. The state-run ‘ Alef’ website published an article concerning the reaction of Iranian people to anti-Iranian statements and insults to Cyrus by Iranian regime’s officials titled “Today, Cyrus, tomorrow perhaps Hafez and Sa’adi (two of the greatest poets of Iran)”: “How long do we want to continue this fake policy and satisfy ourselves with the false hope that this year is over, let’s hope for next year,! What has been the result of these policies so far, except for causing more sensitivity and a worse reaction by the people?

“Why did we not refer to ourselves and were not proud of our history and identity, instead of all these repetitive styles and negative encounters and clashes?” The government source added. “Let’s put aside being proud at all, at least, at the very least, let’s understand that it is not possible to solve the problems same as forty years ago with prohibition and limitations.”

According to the government source, the irony is that many people affiliated to the regime and many government agents think that in order to defend religion and demonstrate their loyalty to the regime, it is necessary to swear and curse the history of Iran and national identity and Cyrus (the great) and King Darius to complete their religion.

Alef website then admits: “The problem is with the heads of the state who have been saying for many years and tried to put into the mind and brain of the youth that history of Iran started with Islam and there was nothing before that. When such elders (high state officials) differentiate between Iran and Islam as such, what do you expect from the revolutionary youth (those affiliated with the government) except to deny the entire history of Iran?”

The source adds: “It’s interesting that the same friends and media (the government media) were angry at the movie 300 that why the United States mocked the ancient Iranians! When we ourselves do not have mercy on our history and we deny and mock our identity, why else do we get upset of the enemy’s statement?”

Mohammad Ali Abtahi, a regime official affiliated to Rouhani, quoting the same source confessed that the risk of lying by government officials is greater than the threat of Mojahedin (PMOI or MEK) to the regime, and wrote in a telegram note on the day of Cyrus: “Yesterday, when I read that officials from Fars province said that the road to Marvdasht (the road leading to Pasargad) was closed due to repairs, I had pity for the decision makers who announce this… The danger of lying by the authorities is greater than the danger of monarchist and Mojahedin and all others.”

The newspaper wrote in its corrupt report: “Experts and opinion holders believe that this work is not a charter, not a law, and not a decree, but one of the many texts containing common sentences that is laid in the foundations of buildings … and it does not represent progressive legal provisions!”